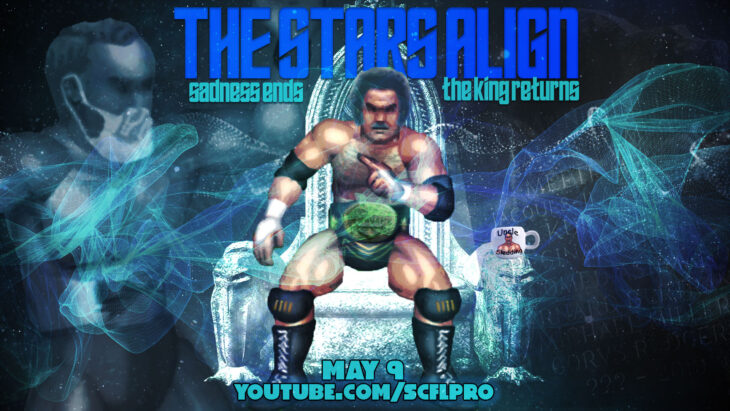 In addition, journeyman Darwin Finch will challenge Clark Clark for the SCFL Pro Dot TV Championship in what should be a blistering fifteen minutes of action.

The Lost Boyz will be defending the SCLF Pro World Tag Team Championship, although it has yet to be decided who gets the coveted spot against the long-running tag team specialists.

Fans will be excited to know that Samantha Sugar’s new hard edge will be tested as she challenges October Schmidt for the SCFL Pro Hardcore Championship in what should be a bloody affair.

As always, there will be sadness involved and madness in this socially-distanced event.

Join us at 8pm eastern/5pm pacific at youtube.com/scflpro.

You can join in the fun with your new, exclusive SCFL Pro merchandise at store.scflfirepro.com, including your very own Uncle Sledding Mug*.

Don’t forget to catch up on March Sadness IV as well!

*Purchase of an Uncle Sledding mug does not constitute owning the SCFL Pro US World Championship. Just like the Mayor (Let Liu), you always get a piece, but not the whole thing.