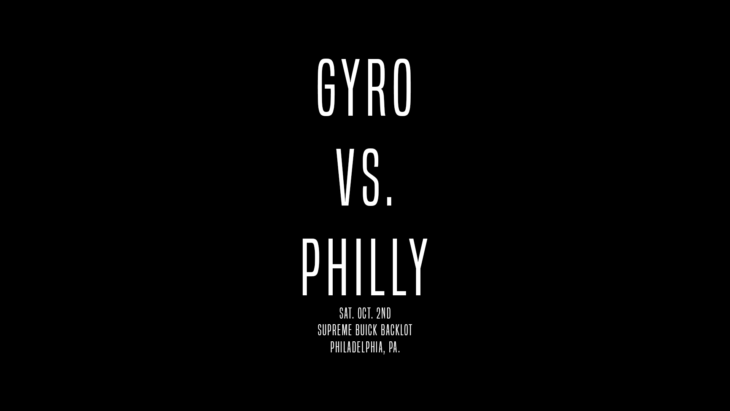 Gyro and Philly Supreme clash in an epic Philly Street Fight, a battle that’s been brewing for years now. After the Supreme family lost Sanders Suzuki to the mysterious Shadow Realm and Cheesesteak fell into a deep depression, the family experienced nothing but loss after loss, culminating in the return of Sanders as a part of the newly formed Shadow Realm stable.

Gyro, afraid of what would happen if Cheesesteak came under the influence of this new, supernatural presence, made a blind crusade against them, unable to see the returning members from the alternative universe were not malevolent, only coping with their personal journeys. Although The Hand, the mastermind behind the kidnappings, was bent on destruction, the rest were his victims, returning confused and dazed, only to find Gyro assaulting them.

The Wedding of Cheesesteak and Sanders saw Gyro, Cheesesteak and Philly’s uncle, absent from the guest list, attempting to crash the party. Upon his appearance, a wild brawl broke out when Philly assaulted him. In the following weeks, things only complicated further, when Gyro attempted to destroy an old CRT television that served as a portal between the worlds. When Cheesesteak confronted his uncle on the roof and pleaded for him to stop, that there were other victims trapped on the other side, he refused to listen, pushing too hard and accidentally sending Cheesesteak over the ledge, the television tumbling after.

The explosion was seen for miles, effectively sealing off any stable link between the realms and the fate of Cheesesteak Supreme. Now Gyro, estranged from his remaining nephew, has asked for forgiveness.

Join us at 8pm Eastern time on Saturday, October 2nd for Philly vs. Gyro.