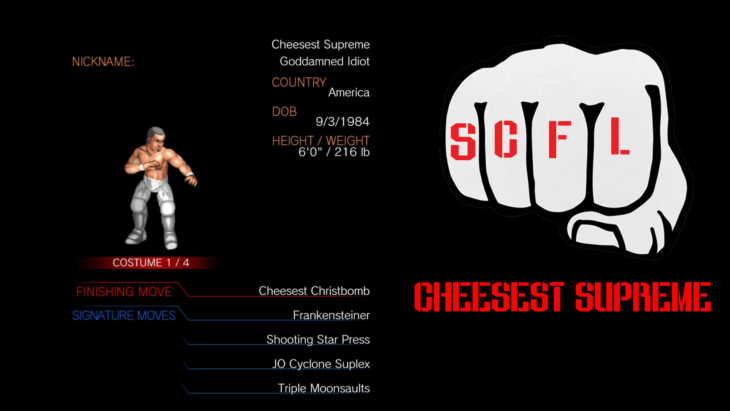 The younger brother of Philly Supreme is a longtime fan of martial arts. While his brother had dreams of becoming a prized pugilist, Cheesesteak saw “Ultimate Fights” on PPV while his brother was at the gym and fell in love. His motto has long been “bro, you gotta mix your martial arts.” While more well-rounded than his brother, he has not had a stellar run as a professional kickboxer. Due to his affinity for beef he is not a fan of Belly Ribbon Fight Camp’s Garden Greene and considers him to be a scourge on the league. He one day wants to see the same success as his brother.

Has serious problems with the idea of another man touching his body. Throughout fights has been heard muttering “Ya wanna touch another man’s body?” Fans have begun chanting along with it. His uncle, Gyro Supreme, considers him to be an absolute moron.

Has formed a successful tag team with fellow haircut enthusiast Sanders Suzuki, with both men teaming with Uncle Gyro Supreme to win the SCFL Trios Championship before being forced to relinquish the title after Cheesesteak suffered a concussion at the hands of Computer Collins, forcing him out of action for weeks.

His alter-ego is that of Cheesest Supreme.