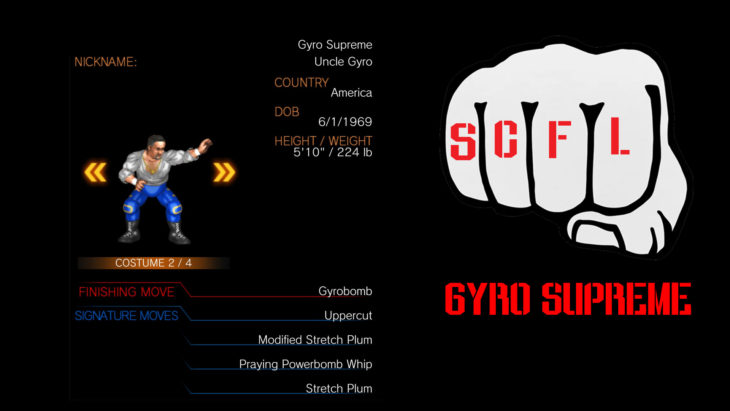 Gyro Supreme is the strange, by-default patriarch of the Supreme family and automobile empire. After the untimely death of his older brother, Fetta, and his wife Darla in an automobile accident (in a non-certified pre-owned vehicle), he was forced to take in his nephews, Philly Supreme and Cheesesteak Supreme, as his wards. Philly, the older of the two, had grown up with Uncle Gyro, only four years younger than him, while Cheesesteak was the baby of the family, eight years younger than Philly. That meant that much of Gyro’s mental energy went into raising Cheesesteak in those formative years, where he helped coach the boys in boxing, life, love and the intricacies of the world’s foremost automobile, the Buick.

Originally simply the steward of the Philly Gym in Philadephia, after Philly’s multiple championship runs in kickboxing the family was able to pursue their real passion: operating a Buick dealership. Combining their business ventures, Uncle Gyro made his way to SCFL to compete among the ranks of the other sad men, winning a few world championships himself before venturing into SCFL Pro.

In SCFL Pro Gyro has captured both the SCFL Pro World Tag Team Championship and the SCFL Pro Trios Championship, with Philly and Cheestesteak and Sanders Suzuki, respectively. Looking to carve out a new niche for himself, Gyro has also added a sandwich shop to the Supreme Buick compound, where he gets to share his passion for artisinally-crafted sandwiches with both the gym members and shoppers alike.

Co-owner of the Philly Gym and Supreme Buick dealership. Also owns a sandwich shop inside of the compound.