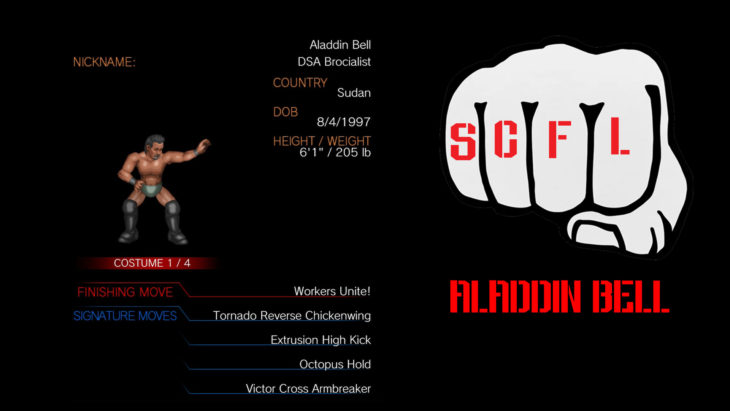 Aladdin Bell was born in Saudi Arabia in 1992, to a father that ran away and a mother who was a prostitute. Aladdin was named after a Disney film thanks to his father’s ignorance of other cultures and he was angry. Very, very angry.

Throughout most of his childhood he grew up loathing his father, until a schoolyard scrap taught him the value of channeling that hatred into something more positive. Along the way he became disenchanted with his home and dreamed of America, of American values. His mother urged him to pursue his dreams and sent him off to college in America. It was there that he discovered the flaws in Democracy and that while things might seem better elsewhere, they were usually more nuanced than that.

His father began fighting in the SCFL to gain Aladdin’s affections, only for Aladdin to attend fights at his mother’s behest and find himself excited by the prospect of him fighting himself. During one of his father’s fights with Offers Thompson, the champion at the time, Aladdin approached the Bianchi brothers about training at Team Belly Ribbon, only for Federal Bell to get distracted and lose his sole shot at the title. His father was beside himself, that his son, a Bernie Sanders supporter, would betray him yet again. His mother decided the best course of action was for both men to train together, like-it-or-not.

Currently representing the DSA (Democratic Socialists of America) alongside his partner America Wright.