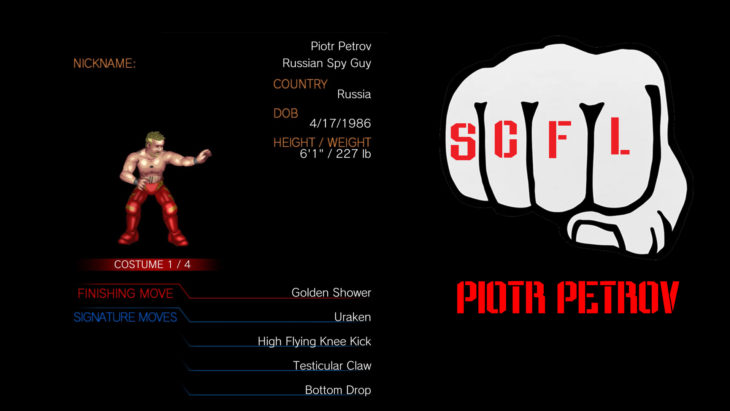 Piotr Petrov, the King of Kings, the man of many claims and a history as unclear as the worst mystery ever unsolved.

Petrov, from Moscow, Russia, has claimed to be a former KGB agent, a close, personal friend of Vladimir Putin and, his most dubious claim, is that he was involved in the legendary “pee tape” of Donald Trump. According to Petrov, his sister, Antonia, is a Russian prostitute, or at least poses as one, and is actually Russian secret service. During a visit, then-candidate Donald Trump stayed in a room that belonged to the Petrovs and peed all over Petrov’s bed and sister.

While the claim doesn’t align perfectly with the Steele dossier story, Petrov claims there are “many tapes” and “many incidents,” although he harbors no ill-will towards President Trump. He simply came to America to make money off of this incident, searching for “The Gawker” to sell the tape to. While he searched high and low for Gawker contacts, he worked in SCFL where he actually began to see some success, only to discover that Peter Thiel teamed with Hulk Hogan to take down Gawker, leaving his prospects for the tape at an all-time low.

It was there that he met like-minded thinkers Federal Bell and Ichabod Adams, who was able to convince Petrov that Trump should not be incriminated and is, indeed, the God King. While Ichabod chased singles glory Petrov teamed with Federal Bell to become the first SCLF Pro World Tag Team Champions and have since been a force in SCFL Pro.