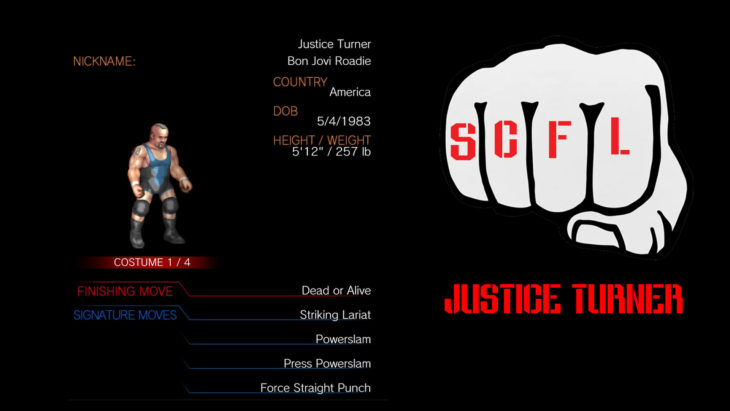 Jeremiah “Justice” Turner was just a small town boy from Pennsylvania when the rock n’ roll bug bit him hard. After high school he ventured out into the world, hoping to become a rock star himself, only to find that his severe lack of timing hindered his ability to be both a drummer and bass player. But he became well known in rock circles as a reliable, tough guy with a good mechanical understanding for the business and instruments. This led to him becoming a roadie, going on some of the biggest tours of the day, including the legendary Monsters of Rock tour.

But it wasn’t true love until he met the tour manager for Bon Jovi, who invited Justice along on the Keeping the Faith tour. Needless to say, before the tour was done Justice had filled a variety of roles before settling into the role as one of Richie Sambora’s guitar techs. His calm, even demeanor and no-nonsense attitude earned him the title of “Tourfather” as he’d dole out bits of wisdom to the band and touring company whenever things were looking down.

In SCFL he’s tried to level with a few of the younger men, but it never seems to work out. He has formed a successful tag team with Blowhole Bernard, capturing the SCFL Pro Hardcore Tag Championship and hoping to again. Sadly, an incident occurred involving the Shadow Realm where only his arm was leftover. More to come.

Finisher: Dead or Alive – The Bounce

Justice Turner was stolen from Gyro’s Heroes and is now part of the Shadow Realm: