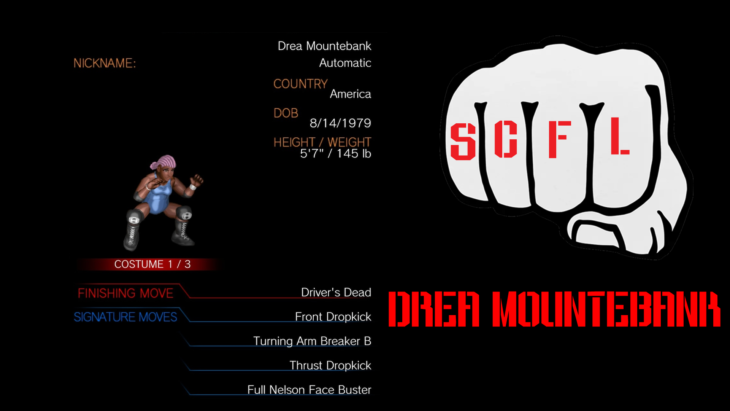 Andrea “Drea” Mountebank was an accomplished dancer and gymnast in her youth, but she wasn’t good enough to make that her career. As the old adage goes, since she couldn’t do, she taught. Drea taught middle schoolers dance and gymnastics for nearly ten years, but due to a vengeful school administration, that was taken away from her in an instant. After the wrestling team failed to meet minimum attendance requirements and was on the verge of being cut, the school board decided to cut all sport and sport-like activities, which included both dance and gymnastics.

Looking for work, Drea moved on up to the high school to teach Driver’s Ed, specifically for manual transmission cars. Unfortunately, nearly all cars in the Driver’s Ed fleet are automatics, severely limiting Drea’s niche specialty. Once again desperate for work, and with legs still like springs (Though with a few extra pounds around her middle than in her competition days), Drea has looked to the wild world of professional wrestling to help make ends meet.

Drea Mountebank is considered missing or dead after being taken to the Shadow Realm while on a bus. Watch “the takening” here: