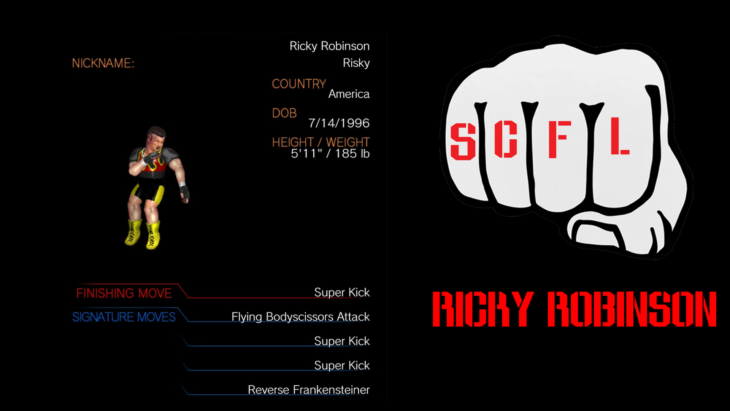 Ricky Robinson is a proud frat brother first, mediocre community college student second. During his initiation party, he got so uproariously drunk that his fellow brothers gave him eyeshadow and lipstick tattoos. While he initially fought against it, he soon grew to love the added pop of color the tattoos added. Desperate for tuition (read: beer) money, Ricky joined SCFL Kickboxing. Before long, he started hanging out with Puncho Baggins and Raoul Hernandez, as the trio shared an affinity for going out to bars and trying desperately to get laid, to absolutely zero success.

Now, Ricky has joined SCFL Pro and has been using the expanded techniques available in pro wrestling to “play mind games” with his opponents that mostly amount to weird gropings.
Finisher: Superkick

Robinson is considered missing or dead after being taken to the Shadow Realm while on a bus. Watch “the takening” here: