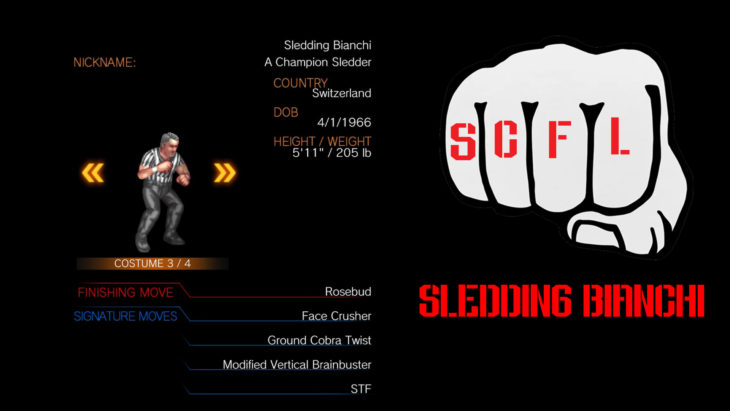 The father of Bike and Boxing Bianchi, Sledding Bianchi represented Belgium as an Olympic alternate bobsledder at the ‘96 Summer Olympics in Atlanta. Keeping with the family tradition to name the male heirs after their future vocation, Sledding intended for his first-born, Boxing, to go on as a traditional fighter. But, Boxing rebelled, and became a regional-level wrestler.

Witnessing the success his sons would have in the fight league motivated Sledding to join the Belly Ribbon fight camp, where he would be followed by cameras for six weeks as he trained in a failed attempt at a thoughtful father/sons reunion reality show. His ineptitude at fighting led to poor footage and a finished product that was deemed “inaccessible due to the pathetic nature of the three leads.”

He is cornered by his sons who will implore their father to constantly punch at his opponent’s stomach, urging him to picture the team tattoo as a mnemonic target.

Sledding is currently in China.

So where *is* Sledding Bianchi? This video was sent to us and we're trying to figure it out. #SCFL #FireProWorld