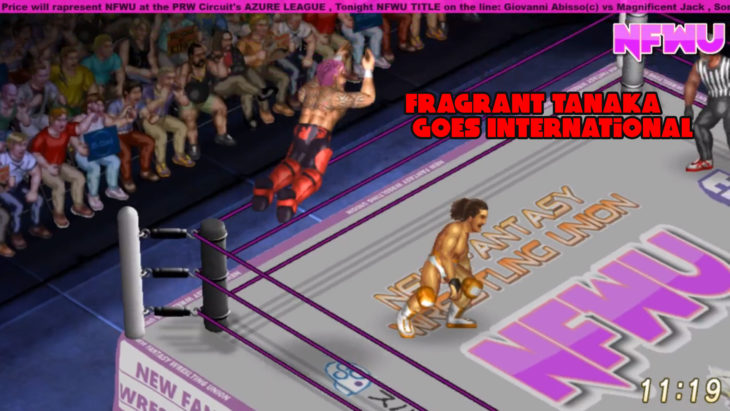 Last Friday Fragrant Tanaka headed out from the cozy confines of SCFL Pro, where he has usually been subject to brutal violence in deathmatches, to the relative comfort of NFWU in Europe. It was there that he squared off in the night’s co-main event against Kenshin Haruki in a back-and-forth battle that looked more like a technical kickboxing match than the usual, hardcore fare that we know Tanaka for.

The two men have a spirited bout that saw Haruki control the match early on before Tanaka was able to regain his wits and land a death valley bomb, a few axe kicks, a moonsault and finally finish off Haruki with the Yakuza Killer in the middle of the ring. Some have heralded the move of allowing Tanaka to compete overseas as a brilliant move by Bike Bianchi, although most believe that Bianchi has no clue about what most of the roster is doing outside of when he concocts a new idea and forces them into seemingly random scenarios, such as late night basketball.

Tanaka proved SCFL Pro proud as a representative abroad with a disciplined victory that somehow didn’t involve any knives coming into play, although the commentator was quick to point out Tanaka’s involvement in the now legendary, awful and disappointing knife fight with Garden Greene from a few months ago that resulted in nobody really getting cut up at all. Needless to say, the fans were not exactly impressed and since then Fragrant Tanaka has blown himself and his opponents up ample amount of times to make up for the lack of blood in the Garden Greene match.