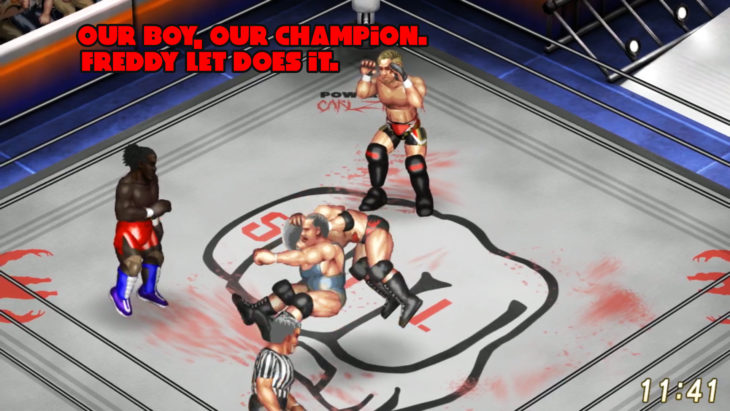 There’s likely and then there’s unlikely. If you were to tell the world a few months ago that our boy — the boy — Let Liu, would be the SCFL Pro World Championship holder, well, you’d be met with laughter. It’s not that Let isn’t a special boy, it’s perhaps that he is a special boy is why no one expected it. Who knew that dressing up as another man would make him a totally different person, with more fire than ever seen before?

Granted, it wasn’t like the match with champion Discussion Davis was anything but a mess. Ichabod Adams came out to attack Discussion Davis, then Miles Manhoef came out to attack Ichabod and even Freddylet. The atmosphere was, in a word, wild. After months of Discussion’s historic reign it ended like this, in a shmozzed, goofy match to a boy in a wig with a fake mustache painted on his face, kool aid covering his singlet.

On top of that this was perhaps the strangest week of SCFL Pro to date. Bradford Culpepper literally died because of the television on his head, although it’s not clear what kind of involvement outside of kicking the television Bike Bianchi played. We do know that Bike was there at the time of Bradford’s death, that he jumped out the window and ran across a field.

On top of that the Shadow Realm was incredibly active. First it struck by taking Charles Dubois, then Fragrant Tanaka, and finally Weather Walker. All of that and it seemingly returned Offers Thompson, yet no one has heard from him yet. Living in fear of the Shadow Realm, Wim Nijman crushed Spencer Morgan to get out of the ring as quickly as humanly possible in defending the SCFL Pro US Championship mug in record time.