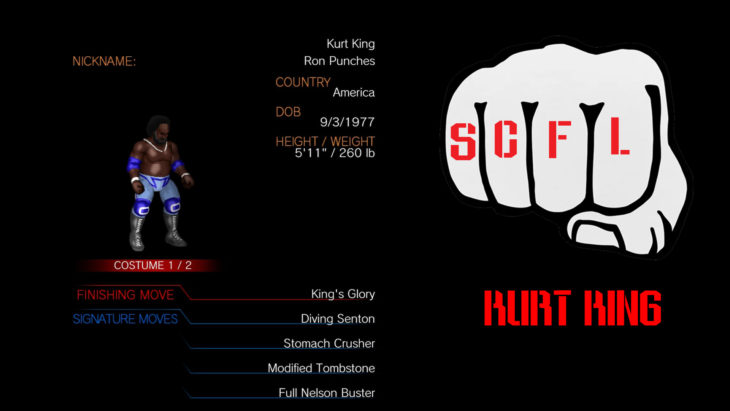 Kurt King was a young kid when he discovered a love for combat sports. He stumbled across some early ’90s longpants kickboxing on TV, and was instantly hooked. He began training and eventually moved to Thailand to hone his skills. Unfortunately, he ended up training with a notorious party animal, and simply couldn’t keep up with his partner’s late nights. Kurt entered many bouts severely hungover and usually went down after a handful of solid knees to the body. After losing a few dozen in a row, realized his Thai boxing days were over, and he moved back to the states. Hoping to become like the kickboxers he grew up idolizing, Kurt has joined the Superchat Fight League and donned the puka shells of the Sons of Anger.

Fighting alongside Miles Manhoef, Ratt Middle, Gorvis Rogers, and 311-inspired leader Rastaban Baptiste, Kurt King has shown that he’s in the upper echelon of the league’s big boys. He has won the Scramble Pan multiple times.

King died in the great Bianchi explosion of 2019, when a blinded Sledding Bianchi open-fired on his indoor grill in response to hearing gunshots from Giovanni Dinner’s bedroom.