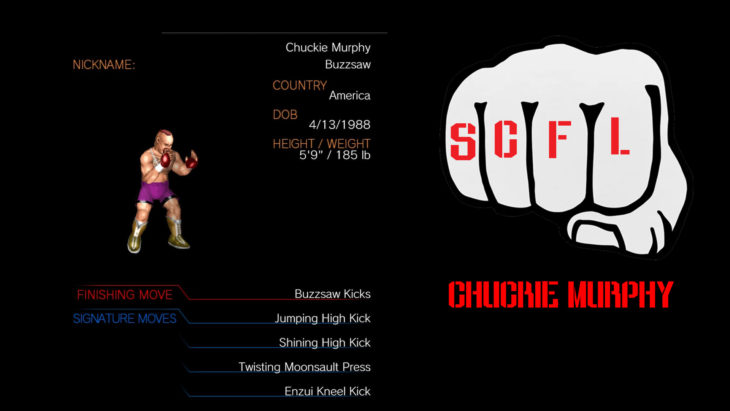 Chuckie Murphy grew up taking Tae Kwon Do classes as a kid and did well, mostly at showing off impressive katas. As he got older, Murphy started getting work as a stunt man for low-budget movies. A mishap involving a flaming bus and several sheets of drywall laid out Chuckie for several months. Unable to keep up his training, he put on a significant amount of weight and grew disillusioned with Hollywood. Chuckie finally got back on his feet, but seemed unable to shed the pounds. Hearing that SCFL takes all comers with enough fights to make up for the paltry individual paydays, Chuckie entered, hoping to rack up enough cash to pay for gastric bypass and several rounds of cosmetic surgeries. Seeking a place to train, he soon latched onto the enormous Sons of Anger contingent.

Chuckie Murphy was killed at the Sledding Bianchi’s House Explosion Memorial by the police, who didn’t raise their guns during the salute: