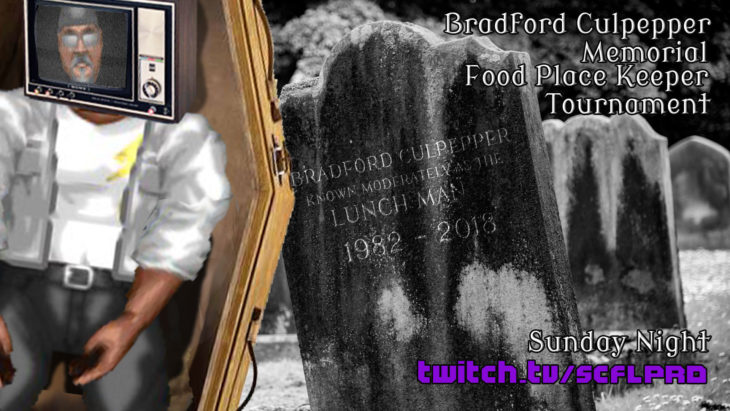 Watch live video from SCFLPro on www.twitch.tvSometimes people die, that is the uncomfortable reality of our existence. Most of the time it’ll happen after a long, fruitful life. Other times people are stolen from us, with their time on this plane of reality cut tragically short. Then, other times, they’re a substitute lunch teacher that was actually a cop that thought he was undercover but really wasn’t. Thus is the story of Bradford Culpepper, the lunchman, who passed away last Sunday evening  in the hospital while Bike Bianchi watched. Bianchi ultimately jumped through the window and bolted, leaving us wondering exactly what happened in the moments before that camera turned on and captured that footage of Bike at Bradford’s bedside.

This week we’ll be remembering Bradford Culpepper with the Bradford Culpepper Memorial Food Place Keeper Tournament. That’s right, a tournament to determine who will take his place as the person behind the counter of the Food Place, doling out moderately nutritious food stuffs to the sad, strange roster of the SCFL.

But that’s not all, we’ve been told that Offers Thompson will be officially returning to the ring for the first time since his departure to the Shadow Realm at Mr. Bianchi’s BBQ Bash. We saw a quick glimpse of him this week on the air and hopefully he’ll have an explanation of what happened to him, where he went and what exactly the Shadow Realm is.

So join us in celebrating the life and times of Bradford Culpepper, the lunchman, the guy behind the counter at the Food Place and the guy that threatened to shoot Bike Bianchi’s pecker off.

This all goes down Sunday evening, August 5th, live on twitch.tv/scflpro.