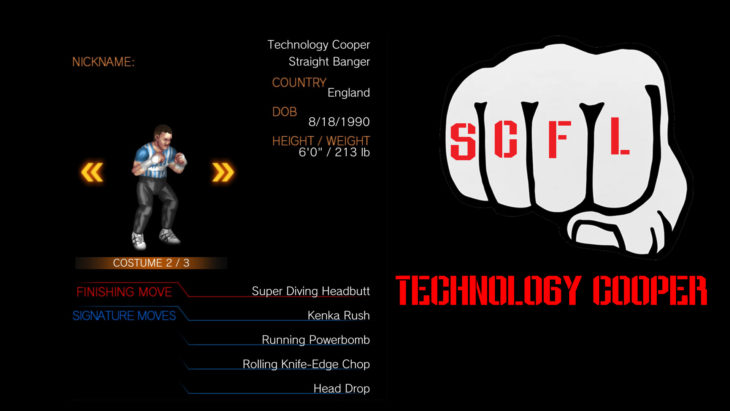 Technology Cooper was a man destined for greatness, his parents seeing that and from his birth trying to give him the best possible start by naming him “Technology” and believing that this would carve out a path for the young squirt. Instead a life of hooliganism, roughhousing and working menial jobs at pubs pushed Technology into the world of professional fighting. In SCFL he found success in the no-blocking, anything-goes Banger Division, with the phrase “Straight Banger” tattooed over his heart.

Now in SCFL Pro Technology has carved out a true niche for himself in the Hardcore division by competing in a series of brutal deathmatches, some of the most gruesome in the promotion’s history, while holding the SCFL Pro Hardcore Championship. The title was won from the deceased Alex Thompson, when Zoning Zhang and he crashed the wake only for Technology to pin the corpse of Thompson. The promotion felt queasy about that victory, instead holding a private bout between Zhang and Cooper in the Beliribuon Gym as a triple threat with the corpse of Alex Thompson. Cooper debuted the exploding barbed wire bat in that match, injuring Zhang and securing the title.