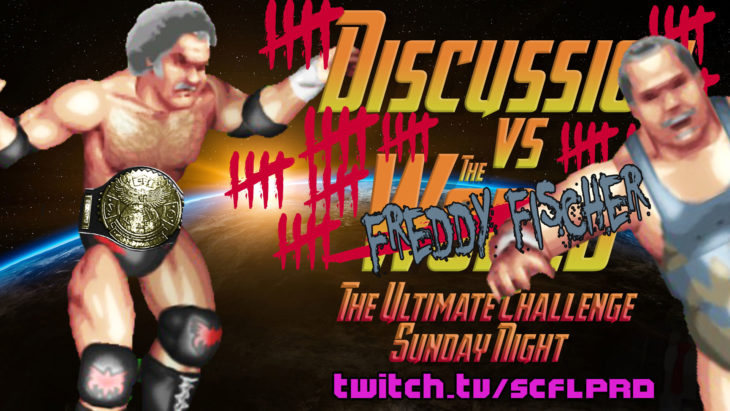 Discussion Davis vs. The World has perhaps run its course in the most unlikely of ways: Let Liu as “Freddy Fischer” coming off of his victory in the SCFL Pro 2018 Substitute Series. While Let Liu himself has been the butt of the joke more often than not, him wearing a wig, smearing some makeup on his face to make a mustache and dying his singlet with Kool Aid has completely transformed him.

It’s almost like Let Liu, when he isn’t acting like himself, is more focused and able to let himself go. The boy is working to what we may believe to be his full potential when he’s pretending to be Freddy Fischer (who is stuck in the Shadow Realm), so now we get to see what he’s really capable of against Discussion Davis. “Freddy Fischer” won the Substitute Series against some stiff competition, including defeating Ichabod Adams in the finals of the tournament when Miles Manhoef came out and phase-shifted through time and space.

It was really something, but honestly, Let didn’t need the assist from Miles as he was already finishing off Ichabod Adams. Of course, as Ichabod will note, there was an assist from the Fixers in transforming the ringside area into a hardcore combat zone. They felt it would help Let, which it perhaps did, as Ichabod flying into exploding barbed wire boards was a new sensation for him and something he never recovered from in that match.

Let even resided over a tag team match between Discussion Davis teaming with Miles Manhoef against Ichabod Adams and Piotr Petrov, with Let counting the three on Ichabod when Miles hit the Skytwister Press on him. Not only can Let count to three, but as “Freddy Fischer” he’s an entirely different person. This Sunday night at 10:00pm eastern time we’ll learn what he’s really capable of while posing as a man stuck in the Shadow Realm.

Also featured on the card will be the SCFL Pro US Championship on the line as newly-crowned champion Wim Nijman will defend against the first-ever champion of Spencer Morgan in what should be an incredible co-main event.

Samantha Sugar has also demanded a rematch with Kurt King for the SCFL Pro Dot TV Championship after their nail-biter of a match last week that saw Samantha almost score the three-count just seconds before the bell rung. Kurt King has obliged and we’re in for a real treat of a rematch this weekend.

Perhaps we’ll even learn more about what the hell happened to Bradford Culpepper after Bike Bianchi rage quit on him and inadvertently hit him in the head with a CRT television.

So join us at 10pm eastern on Sunday night at twitch.tv/scflpro!