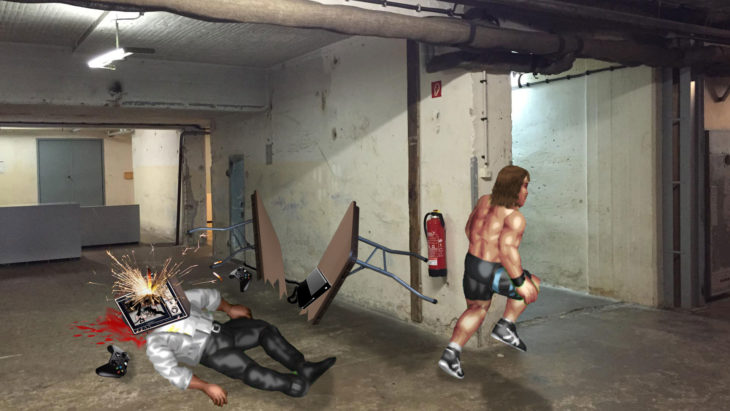 The bad blood between Bike Bianchi and Bradford Culpepper has been festering for months. Culpepper, the sole employee of The Food Place, the cafeteria where SCFL gets all of its food from, had been seething with rage towards Bianchi since his start. Little did we know that Culpepper was attempting to get dirt on Bianchi to arrest him. He was effectively an undercover cop, even though his actual job was that of a School Resource Officer. After he unmasked his true intentions he went on a rampage, injuring many and setting his sights for the Bianchi family to gain more intel on Bike, even though his boss, Officer Nate, had told him that it was time to give up the charade.

Bike Bianchi returned to his Masked Cyclist persona and went underground, only to resurface to issue a formal challenge to Bradford Culpepper, which happened on Sunday night. With a banner of “Hell Comes to Iowa” we all expected — perhaps wrongly — a Hell in a Cell match, even though the SCFL doesn’t have the money or resources to put a roof over our cage, nor the rights to the name “Hell in a Cell,” regardless, expectations were high.

Bike, in all of his strange, internal monologues and anxiety, concocted a way around all of this: they would battle each other in WWE2K18 inside of a Hell in a Cell match. It was one of the most confusing moments in SCFL history (which is saying a lot), and somehow brushed over the fact that Bike discovered another tape from Jensen Woods asking if anyone had found “The Guide” and if they had activated “The Seer.”

There isn’t a lot to say about the match between Bike and Bradford except it happened and when it looked like Bradford had the match won — via Bonzai Drop — Bike paused the game multiple times in his frustration of being unable to properly play the kick out mini-game, before rage quitting the match. He stormed off, but not before turning around and delivering a patented Bianchi flying knee to the ancient, CRT television that they were playing on. Well, a chain reaction happened from there, as the table buckled under the pressure and the television flew off of the table, hitting Bradford in the head, squashing him to the ground in a puddle of his own blood.

Bike Bianchi fled the scene and officials have not released the status of Culpepper to us yet, leaving us in limbo.