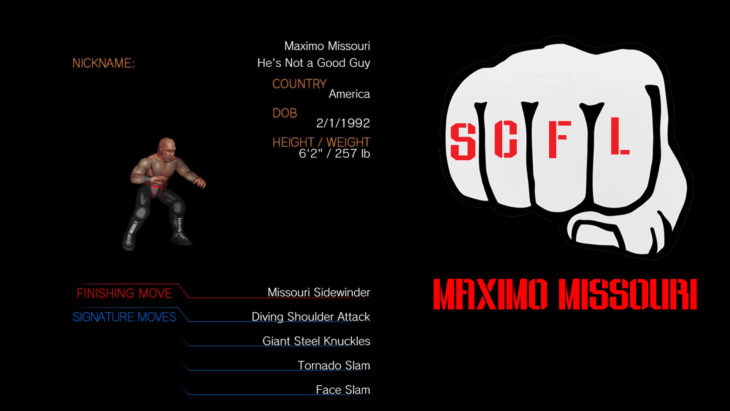 The text book example of “Goddamn it, he’s got talent but lacks discipline!” Maximo Missouri is a former [?] member of a South American drug cartel with a penchant for violent knockouts and totally abandoning the game plan. He has several gunshot wounds, including a bullet still lodged in his skull like that dude from The World is Not Enough. No one is really sure how he came to be in league with the Missouris and his violent tag partner and brother Maniac Missouri, but we’re starting to get the feeling it’s a bit like Pyscho Mantis’ dying monologue in Metal Gear Solid.

He has a penchant for hardcore matches and will bleed just because he likes it. Maximo is insane and has put on a historic amount of hardcore matches. He doesn’t care if he wins or loses, as long as there’s blood. His Mr. Bianchi Bathroom Deathmatch against Technology Cooper was legendary.