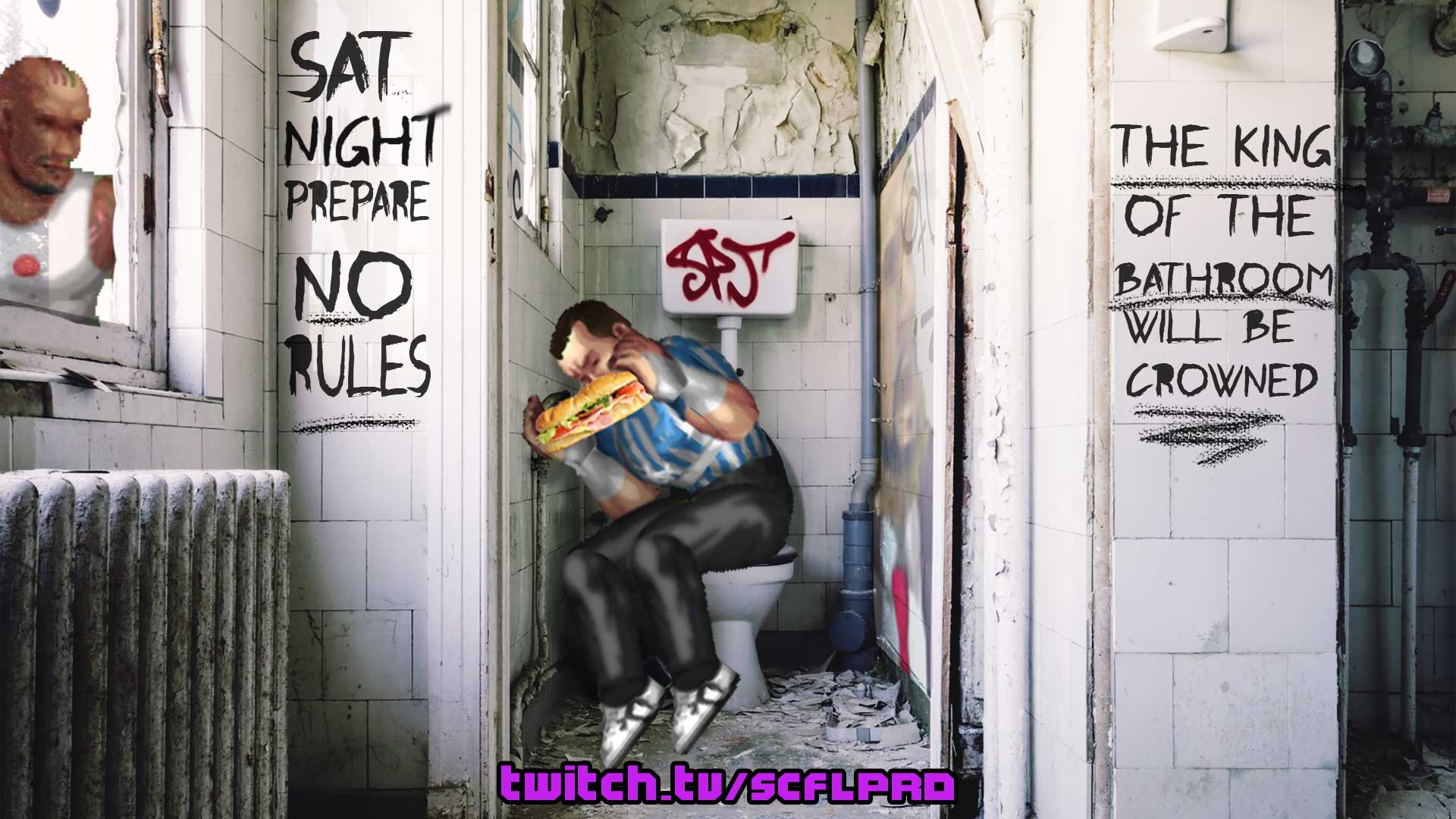 Hello Big Ass Fighting (TM) fans! Superchat Pro has returned for another night of action, excitement, and intense violence. Live, at twitch.tv/scflpro, starting at 1:30AM ET on Sunday morning from the Beliribbun Civic Auditorium and SARS Preparedness Center, Bichael Bianchi has concocted another fantastic card of pro wrestling action.

Starting things off is the venerable Opener Scramble Battle Royal. New champ, October Schmidt, looks to defend his super slick teflon pan against seven other hungry competitors who want to win that skillet and make delicious breakfasts in it.

Meete Mein and his tag partner Chuckie Murphy fell short in their quest for Tag Title number one contendership last week, losing to the LOST Boyz. However, Mein impressed enough to earn a crack at the Dot TV title this week. He takes on new champ, Wim Nijman, who dispatched with former new champ Choochai TrainMTGym in short order. Both of these men are known for putting opponents away in violent fashion, so this match should be intense.

The tag team division is incredibly unstable, as a surging pair can get derailed in a myriad number of ways. One partner could suffer an injury, stopping the team’s momentum, or, just as likely, one member could finally come to the realization that his partner is a feckless nincompoop and is keeping the actually good wrestler from achieving even greater success. As such, it’s important to frequently feature high-level tag team action, which is why Immediately Ito is teaming with his Belly Ribbon pal Weather Walker to take on the more established duo of Blowhole Bernard and Justice Turner. A victory here could mean the first step on a path to glory, riches, and success.

Tapas Tiempo has continued to defeat each and every member of the Sons of Anger that has been put in front of him. Gordon Kuntz gave him a tough test, but Tiempo pulled out the victory and pulled off Gordon’s puka shell necklace. Now, Tiempo meets with Gary Bollea, who’s finally back in action after suffering a neck injury in his Shoot title loss to Boxing Bianchi. Gary will need to be careful he doesn’t eat too many of Tiempo’s devastating lariats, or his neck will put him back on the shelf.

Our current Tag Team champions, the Supreme Family of Gyro and his nephew, Philly, will be defending their titles next week against Both Ferrari and Until Robert, collectively known as the LOST Boyz. This week, Philly will take on Until, while Gyro tangles with Both as these teams try to get to know each other.

Last week, the Kelley family returned to action and defended their Hardcore Tag titles against Ricky Robinson and Puncho Baggins. This week, Puncho has a new partner in old friend Raoul Hernandez, but they don’t have an immediate crack at the Kelleys. No, Raoul and Puncho must take on Brick Roberts and Eosinophil Rossi in a Hardcore Tag match, with the winners being named the number one contenders, and getting a shot next week.

Giovanni Dinner and his mischievous Mama have been flustering all manner of referee in Superchat Pro. Now, the young Dinner is taking on Especially Esposito, and if Bichael Bianchi is any kind of commissioner, Mama Dinner will be barred from ringside.

After multiple knives were brought out last week, the PK Gym team of Fragrant Tanaka, Blaster Robinson, and Karate Hendrix became number one contenders to the Trios titles. However, this week, they and fellow PK Gym member, Baby Hayes, will take on the Trios champs of Ratt Middle, Rastaban Baptiste, and Gorvis Rogers, plus their fellow Son of Anger, Turgid Delmonico in 8-way Atomicos action. Hopefully, the blades will remain out of play for this contest.

Credit Lewis impressed a lot of people when he savagely destroyed Mike Miller’s knee in the March Sadness tournament. Now, Lewis is one win away from challenging for Boxing Bianchi’s Shoot title. Credit takes on the freakishly small mouth of Zorastriani Brown in an MMA-style bout to determine number one contender status.

Last week, Miles Manhoef and Jacques Jean-Jacques took on former tag champs, and staunch Alt-Right shit heads, Federal Bell and Piotr Petrov. Unfortunately, Miles and Jacques also had to deal with Gene Greene and Ichabod Adams on the outside. The Damn Numbers Game finally caught up to the leader of the Kneevolution, and the Alt-Right emerged victorious. Now, Miles and Jacques have found an ally in Torvald Harrallssen, a man who lives and breathes socialism, to take on Petrov, Bell, and Greene. It’s incredibly likely that Ichabod will still try to interfere as his campaign against Manhoef shows no signs of stopping, but Adams might be a little hesitant with the man that knocked him out and took his kickboxing World title on the other side of the ring.

Hardcore champion Technology Cooper would be best served by resting up this week, but he’s decided to put his belt on the line against the dangerous, insane, insanely dangerous and dangerously insane Maniac Missouri in a Bathroom Match. The one good aspect of this contest is that the tile and linoleum will be easy to wipe down after it gets splattered with copious amounts of blood.

Please join us on Saturday night, 10:30PM PT, on twitch.tv/scflpro for the only name you can trust in the harsh, brutal world of regional Iowa-based online pro wrestling.