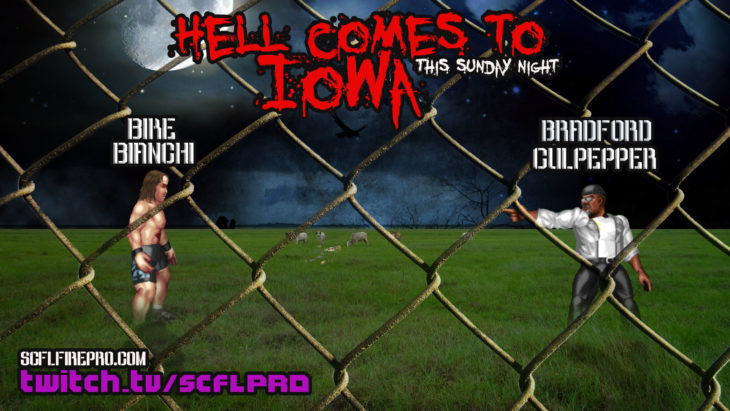 However you choose to define hell remains up to you. Is it an abstract concept, a state of mind or an actual, physical place where your very essence is transported to for your sins in life. For some, well, Belliribbuon, Iowa is exactly that place. No, you can’t find Beliribbon, Iowa on a map, nor does it have a static spelling. So what exactly is happening with SCFL Pro this week? Hell comes to Iowa, hell comes for Bike Bianchi and Bradford Culpepper in their storied feud.

That feud dates back quite a while, to the #ClotheslinesForClothes telethon to “Clothe Our Refs,” after Discussion Davis went on a rampage and stole Picaporte Rodriguez’s referee shirt, stretching it out beyond repair, then took Sledding Bianchi’s shirt and burned it backstage. It turns out that Bradford Culpepper wasn’t just a substitute lunchman, but he was an undercover police officer on a sting operation to catch Bike Bianchi in the act. What act? Nobody really knows, but he chose the telethon to act.

It was there that he, well, he threatened to shoot Bike’s pecker off if he didn’t consent to being arrested. Bike went to prison, but only for a few moments before his father took the telethon money and bailed Bike out just in time for his SCFL Pro World Championship bout with Discussion Davis where he lost, soundly, to Davis. In the following weeks we were treated to these strange tapes of Bradford Culpepper narrating his life story, from a failed school resource officer to forging his own path undercover even though it wasn’t his job, nor was it authorized.

Culpepper refused to stop fighting Bianchi, injuring him in the process, while Bike was under the moniker of the Masked Cyclist. Now we know, again, that Bike Bianchi is the Masked Cyclist and these two are ready to finish what they started inside of the ring. Although there have been rumblings that this “Hell” stipulation is actually a Hell in a Cell match, which is copywritten property of the WWE, not something that Bike Bianchi would ever have access to. Will they put a roof on the cage that was built from Mr. Bianchi’s old backyard fence? Will they do something else? Nobody really knows, but this week we’ve been promised a thrilling conclusion to the Bike Bianchi and Bradford Culpepper saga.

Discussion Davis is said to be looking to jump right back into his SCFL Pro World Championship Open Challenge, but against whom? Let Liu’s “Freddy Fischer” holds a claim for the title, as may Ichabod Adams and Gyro Supreme.

This all goes down at our usual time on Sunday evening, live on Twitch at http://www.twitch.tv/scflpro at 10pm eastern time.