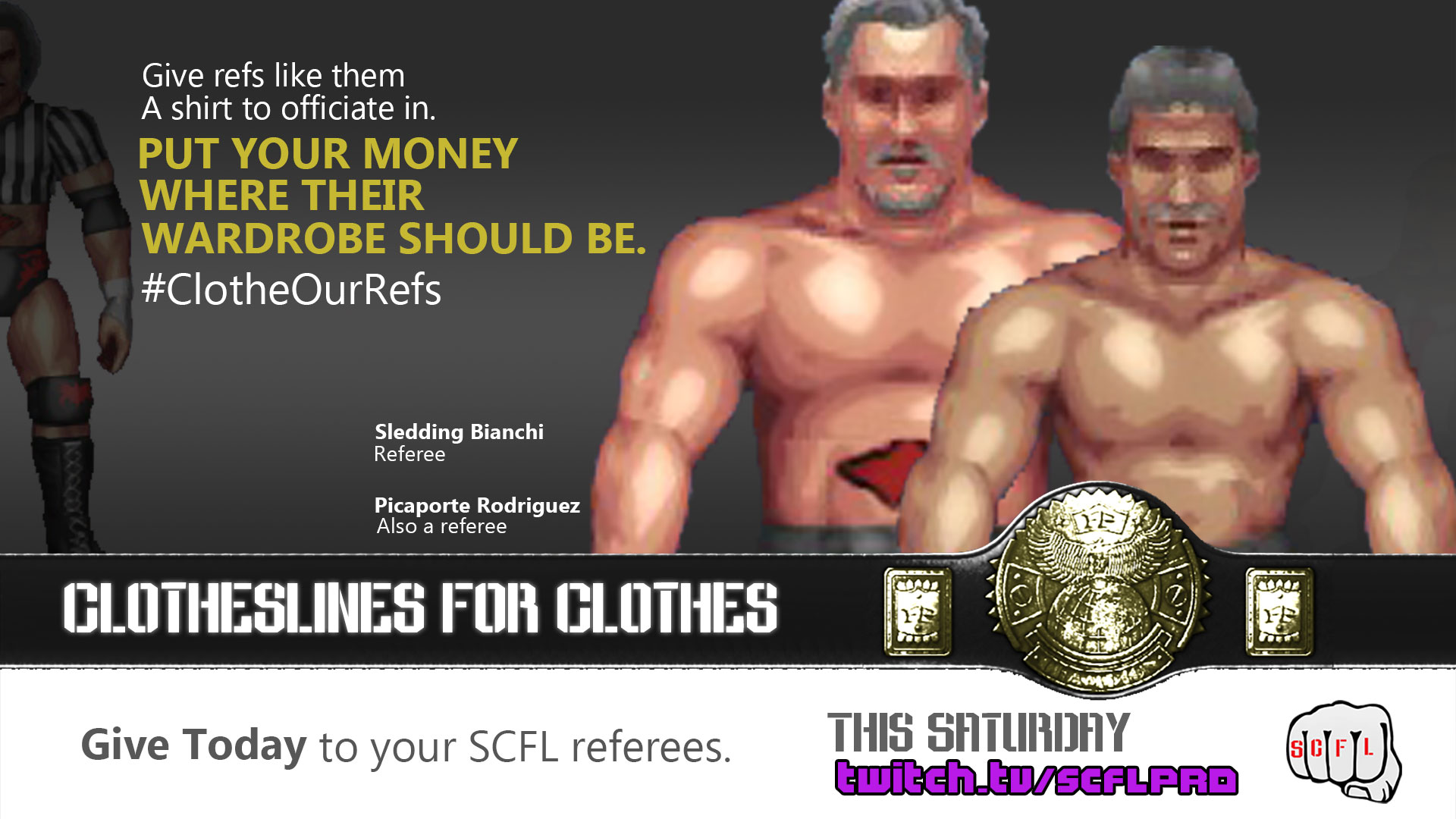 Hello, Superchat Pro friends! We’ve got quite an amazing show lined up for this week’s installment, which should be kicking off live, at twitch.tv/scflpro on Saturday night at 9:30PM PT. It’s the end of the month, which means it is time for ALL TITLES ON THE LINE!

There’s also another wrinkle (No pun intended) to this upcoming showcase extravaganza. We, the proud staff of Superchat Pro, come to you, our wonderful and beloved audience, with hat in hand, asking that you look deep in your heart and bank accounts, and if it is at all possible, donate to the Clothe Our Refs campaign. The dastardly Discussion Davis has burned all of our referee shirts, and Superchat Pro is currently unable to afford new shirts. So please, watch our show, share our show, and only if it’s financially feasible, save our show.

As with any Superchat Pro show, we begin with an Opening Scramble match. Ron Lewis is our current champ, and he’s putting that fantastic skillet on the line against seven other men. But these aren’t seven ordinary men, no, these are seven former Scramble winners. Every man in this Battle Royal knows what it takes to win the pan, and they’re all desperate to get it back in their possession once more.

Last week, the LOST Boyz were expecting to face down Gyro and Philly Supreme in singles competition in preparation for this week’s Tag Team title contest. After all, the LOST Boyz had earned their number one contender spots with a win over Chuckie Murphy and Meete Mein the prior week. Unfortunately, Gyro Supreme and Foundation Russo found out they really like fighting each other, so much that they actually teamed up to take out the LOST Boyz. Foundation knocked Until Robert out cold, leaving Both Ferrari high and dry. Since Russo doesn’t have any friends or family, Ferrari is challenging Gyro’s hapless nephew, Cheesesteak Supreme, for a modicum of revenge.

Moving on from the convoluted to the caged, we next have a Shoot Title defense, as Boxing Bianchi is taking on Zorastriani Brown. Word has it that Brown has to cut a Cheerio in half to make an adequate mouthguard for these hard-hitting MMA-inspired contests.

Wim Nijman finally put a stop to the Dot TV title’s constant movement, as he fought Meete Mein to a time limit draw last week. Now, he’s facing another member of the Sons of Anger in Gordon Kuntz. Kuntz is fresh off a brief stint on the injury shelf, and in slightly less recent news, took Tapas Tiempo to the absolute limit, going well over 35 minutes with the puka-snatcher before finally submitting to a torture rack. The one thing we can say for certain is that he won’t be in the ring for anywhere near as long this time.

Technology Cooper is a man possessed, which might not be surprising considering he attacked a corpse and exploded a barbed wire wrapped baseball bat across a man’s head. So there’s a good chance Cooper has absorbed at least two souls in recent memory. He is also the current Hardcore champion, and defended that title last week against Maniac Missouri in a brutal Bathroom Brawl. Now, Cooper is taking on Algorithm Schneider. Schneider earned his way to this match by exsanguinating Front Reed two weeks ago in a gory affair.

Hello. Here is the match of the week. #FirePro #FireProWrestling https://t.co/5jhwmrGjbH

The Sons of Anger A-squad of Ratt Middle, Gorvis Rogers, and Rastaban Baptiste have long been synonymous with Trios excellence. While they came out on the losing end several months back, they were part of one of Superchat Pro’s greatest matches of all-time against the Supreme Family. Now that they are the champs, after some weird issues with The Fixers, the Sons look to defend their titles against the formidable PK Gym. Karate Hendrix, Baby Hayes, and Fragrant Tanaka are all dangerous foes, and if they decide to grab some knives that may or may not be hidden under the ring, things could go from dangerous to deadly.

Kelly and Mickey Kelley might not show up every week, but when they do, there’s bound to be incredibly awkward moments, buckets of spilled blood, and an unfathomable amount of traumatic brain injuries. Now, the Kelleys are defending their Hardcore Tag Team title, represented by a framed picture of The Public Enemy, against Puncho Baggins and Raoul Hernandez. Kelly claimed he wouldn’t even need to bring his Large Nearly Adult Son to retain against Baggins and Hernandez, but Mickey has made his way to the Beliribbun Civic Auditorium and Museum of Sludges for this brutal bout.

Tapas Tiempo flat out hates the Sons of Anger. He’s been brutalizing members week after week, culminating in the removal of their puka shell necklaces at the conclusion of every match. Now, his former tag team partner, Fortran COBOL has returned from the injury Tapas inflicted on him at March Sadness, and is looking to stop Tiempo dead in his tracks.

Spencer Morgan is perhaps the biggest underdog in Superchat Pro. He splits time between wrestling and being the greatest night manager of any Men’s Warehouse in the continental United States, so much that he’s already had one title stripped due to having to close the store one Saturday night. Despite all the naysayers, Morgan holds the U.S. Title, which, unfortunately, is simply a coffee mug. However, he’s facing another underdog in Freddy Fischer. Fischer’s run with the Dot TV title has been impressive, but that just serves to contrast the pitfalls he’s faced in his personal life. Now, these two men will clash for a ceramic mug with another man’s face on it. Regardless of who wins, it will be a shocking upset.

Speaking of underdogs, Miles Manhoef has been constantly thwarted by the Alt-Right, and its leader, Ichabod Adams. Adams has refused to enter the fray directly, allowing his goons and the Damn Numbers Game to work in his favor. Now, though, Manhoef will finally get his hands on Ichabod. Expect Petrov, Federal Bell, and Gene Greene to be at ringside offering Adams moral support, and more than likely, a lot more, as these two clash for a number one contender spot for the World Title.

The Supreme Family are looking for revenge as they defend their Tag Team titles against Foundation Russo and Computer Collins. Philly and Gyro have a long and storied history with these two members of the Belly Ribbon Fight Camp, and now all four men will be in the same ring, ready to tear each other to shreds. This match promises to be intense!

In the main event of the evening, Bike Bianchi makes what some would argue is the first legitimate defense of his World title. Bianchi won the belt thanks to a controversial fast count a few months back, and as such, his win over Ichabod Adams is seen less as a defense and more as a way to legitimize Bianchi as the true champion. His next defense came at the hands of Kelly Kelley, and even if the Irish firebrand hadn’t wrestled in half a dozen matches by that point, his general losing streak wouldn’t make him a credible challenger. Bike then granted his father, Sledding, a crack at the title, based on the mere qualification that Sledding had refereed the entire March Sadness tournament. Sledding, not being a true full-time competitor, offered little resistance to his son.

Now, though, comes Discussion Davis. The preeminent kickboxing champion. A man hell-bent for championship gold. A man with a string of so many late finishes that “Fourth Round Discussion” became a memetic figure, encompassing his ability to persevere and deliver devastating knockouts in the all-important championship rounds.

However, Discussion’s path to this title shot was by no means straightforward. He went well over half an hour with the hapless Dougie Middle. He went to a 60-minute time limit draw against Xylophonist Bianchi and Let Liu, in an ill-advised, ego-fueled bid to become the first man to defeat two opponents simultaneously. He took to attacking referees in order to steal their official striped shirts and become a referee himself, desperate to be crowned as the first World champion referee. If there wasn’t already a strong case that he’d suffered severe mental trauma when he was attacked by a pack of raccoons, it’s not without reason to suggest that Davis has lost his mind.

Finally, two titans of Belly Ribbon will do battle for the biggest prize in Superchat Pro Wrestling history. The founder versus the face. The well-meaning, yet bumbling leader versus the most decorated champion in league history.

It all goes down Saturday night, exclusively at twitch.tv/scflpro at 9:30PM PT.