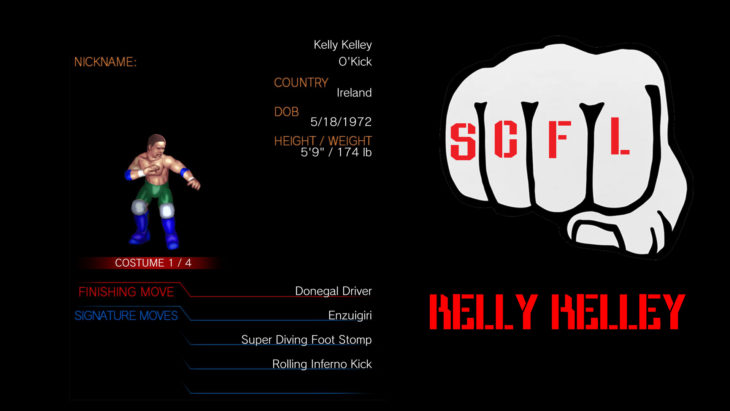 Hailing from Donegal, Ireland, Kelly Kelley has three passions in life: cigarettes, his large, nearly-adult son Mickey Kelley, and being the greatest fighter in all the land. Fighting was always a struggle for Kelly, who combined being incredibly small with a propensity for talking ridiculous amounts of trash that he was unable to back up. Kelly became a substitute teacher in Ireland to help cover the enormous amount of food his rapidly growing son required. Mickey was the one that told his dad about SCFL, and Kelly, eager to stop fighting superheavyweights, jumped at the chance to go to America and face off against 185 pounders. Unfortunately, success didn’t follow Kelly across the pond. However, despite a propensity for getting beaten up, Kelly’s toughness made him a fan favorite. Now that he’s entered the world of pro wrestling, Kelly is more focused on making sure Mickey doesn’t get hurt rather than winning his own matches.

Kelley is considered missing or dead after being taken to the Shadow Realm while on a bus. Watch “the takening” here: