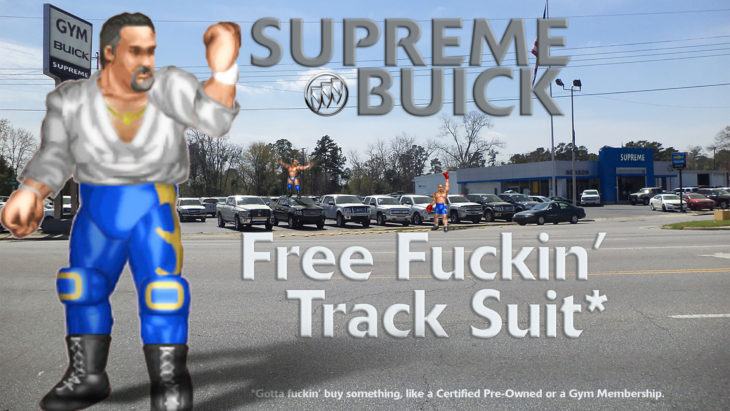 Look, I know that you know who I am. From selling quality, certified pre-owned vehicles to sandwiches and running a successful gym, you might look at the Supreme family and say that we’re living the life. The truth is that we are not fortunate people.

No, I ain’t askin’ for no tears to be shed, just understanding is all. This past weekend, at Mr. Sledding Bianchi’s stupid-ass BBQ, we showed up in good faith, and in return we lost one of our own. Sanders Suzuki might be a moron, but he’s our moron. At this point he just ain’t a good friend of Cheesesteak Supreme’s no more, he’s like family to us. He’s fought alongside us, been there through some of the tougher moments and been a helpin’ hand.

Sure, those boys might’ve been doing some sorta weird shit up in the attic at some point, but that don’t matter ‘cuz I set ’em right on that and told them that they could do whatever the fuck they wanted as long as it wasn’t by the sandwich prep area. But when my baby boy was in the hospital, cursin’ the name of that bastard Computer Collins, well, who was there every day to help keep Cheese’s fade skin-tight? Philly and I have businesses to run and all. I’m not sayin’ we didn’t visit, ‘cuz we did, but Sanders was there every step of the way, from the spongebaths to the haircuts and those moments of weakness that I’ve been encouraging Lil’ Cheese to have.

That’s how Sanders became family. We’ve held the SCFL Pro Trios Championship together, he’s been my backup at press conferences (even if he ain’t wearin’ no pants ever) and we’ve all come to an understanding, you see. So yeah, a few months ago maybe I wouldn’t really give much of a shit if he disappeared and just left an arm behind, but this Shadow Realm nonsense needs to stop now. Enough is enough.

Where’s Bike Bianchi, huh? He’s the one running this popsicle stand, ain’t he? We run our businesses on the up-and-up. I got hierarchies that can handle our business when I’m away fightin’ with Philly. Ol’ Slick Pete handles the sales and marketin’ side, my buddies Tuck and Lucy handle the crew and dumbass Cousin Rudy even makes sure that everything goes okay in the gym. Who am I supposed to talk to here to get Sanders back, huh?

That roadie guy came back an’ seems okay, but his arm still smells like fuckin’ fishsticks. He said something about it having something to do with Computer Collins — of course it does, that monster murdered by grankid Stromboli afterall — plus we all saw that weird shit when they fought those Lost Boyz the other week. I don’t know. I can’t find Jensen Woods anywhere and I’m beginning to think he’s as dumb as the rest of these assholes.

I guess what I’m sayin’ is this: please bring our Sanders home. Cheese ain’t had a haircut in over a week now and it’s getting shaggy, plus I can see the look in his eyes. That boy ain’t right, he wants his friend back. If you can help, find me on the Twitter machine, @SupremeBuick. Thank you.