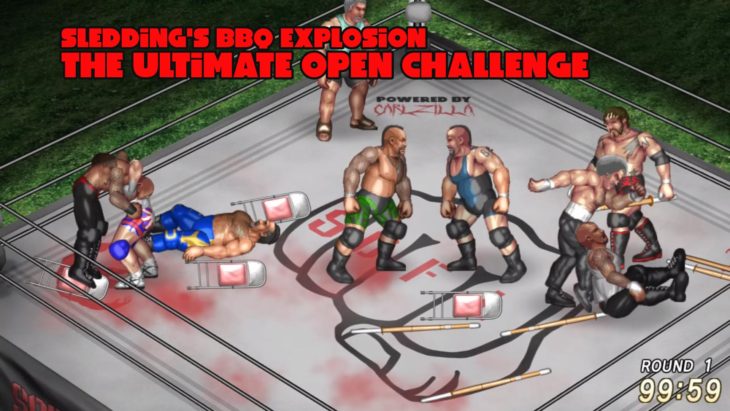 Much to the surprise of absolutely no one, Sledding Bianchi’s big BBQ Bash turned into a total and complete disaster.

Things started off strangely enough when the SCFL Pro Dot TV Championship was on the line between current champion Wim Nijman and Offers Thompson, the greatest Dot TV Champion in history. It was a hard-fought match that saw Offers start to gain control, only for, well, the Shadow Realm took him. That’s the only way to say it. Offers bent down to pick something up — something that we clearly couldn’t see — when his arm was all that remained of him.

If you aren’t sure what to make of it, well, you aren’t alone. This was an incredible showdown between two of the greats and it was cut short, showing that the Shadow Realm doesn’t just take folks in the Belliribbon Civic Auditorium.

The Steel Drum Band were set to close out the show and, well, they played, but they didn’t close out the show, not by a longshot. What happened was they debuted their latest song, “Bitter End (We’re The Steel Drum Band)” which can be heard right here on SCFLFirePro.com. But that wasn’t the end of the show. Oh no, instead, Ichabod Adams, with Ron Harris in tow, stormed the BBQ and presented a legal document to Sledding Bianchi, demanding an immediate title shot or else a lawsuit would be filed. Sledding, afraid and ashamed, granted that title shot to Ichabod, with Discussion standing nearby and getting involved in the scuffle.

Miles Manhoef quickly swooped in, attacking Ichabod with everything devolving into chaos. More and more men began piling into the ring before Discussion ever showed up, only for a power outage to occur and Sledding — already stressed out — demanded order. If there was going to be an open challenge, there would be order. So the match, and its participants were told to calm down and the actual match between Discussion Davis and Ichabod was underway. Only Miles Manhoef wasn’t going to have any of it, Miles once again storming the ring and interrupting the match. For some reason — nobody really knows why — Sledding interpreted this as Miles taking part in the open challenge. From there, well, chaos once again was the key, with the Steel Drum Band, Let Liu and many others rushing into the ring, looking to be the person that defeats Discussion Davis and takes home the title.

Only for — yes — once again, the Shadow Realm to claim another victim, this time it was Sanders Suzuki. Sanders, who was fending off Bradford Culpepper at the time, reached again for a mysterious item that none of us could see only to disappear. That wasn’t the only problem that we were experiencing, either.

Because just when we were trying to process what happened to Sanders, Police Officer Nate arrived on the scene to issue an incredibly stern warning to Mr. Bianchi for what was deemed an illegal gathering and a public nuisance. Discussion Davis, after nearly an hour in the ring, would patch himself up and call it a day while most of the roster headed home. Just when you thought the fun was over, though, Blaster Robinson made his way out and demanded that he get his shot, which brought out a battered a bruised Discussion Davis, taped up ribs, the cut on his head bandaged up and his nose with a breathe-right strip after being bashed in, accepted yet another challenge.

What followed was the most insane few hours of professional wrestling history, where men filtered into the ring, only to get eliminated, while Discussion Davis held on for dear life. Not just for an hour, not just for two, but for about four hours of in-ring action. An upset Blaster Robinson made his way back to the ring at one point after some rest, but even then it wasn’t enough. When down to the wire between Gyro Supreme and Discussion it was Gyro’s refusal to go “hardcore” that ultimately cost him, with Discussion doming him with a tiki torch, then following up with the Champion’s Fall for the win.