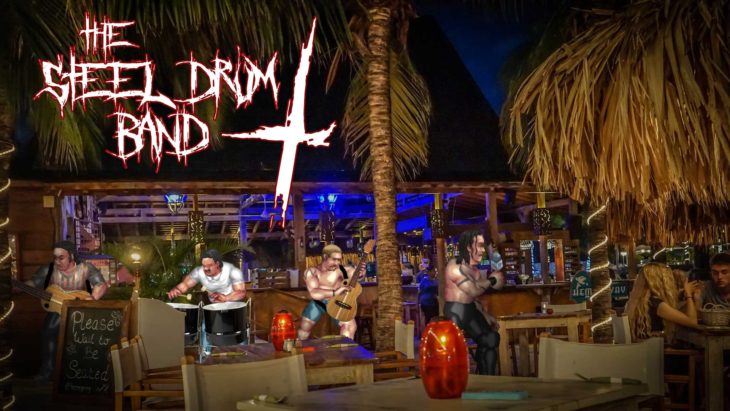 This Saturday night, live on twitch.tv/scflpro the hottest act in the world is returning to the place that made them famous – SCFL. The Steel Drum Band, the greatest collection of pro wrestling and musical talents ever assembled, plus Xylophonist Bianchi, will be performing at Sledding Bianchi’s Backyard Barbecue.

Fresh off a whirlwind tour of the local Jimmy Buffett’s Margaritaville, two Cheeseburger in Paradise locations, including the new, nice one by the airport, and, due to a scheduling mixup, one Benihana’s, the Steel Drum Band made time to sit down for a quick interview about the upcoming performance.

SCFL: Gentlemen, congrats on the tour. How does it feel to be playing this backyard barbecue?

Ron Lewis: As long as there’s plenty of free beer, it’ll be fine.

Nightsbane Kvlt: The old man stinks of death that will never come. His house is a cursed blight that can only be cleansed with black flames.

SCFL: A lot of people really loved your hit single “We’re A Steel Drum Band” that premiered at the Clothe our Refs telethon. Word on the street is that you’ll be playing a brand new song at the barbecue. Can you give us any insights into how this new track came about?

Lewis: Well, it’s always interesting when we get together to make music. We have such different styles, both in the ring and in the studio. Some guys want to go heavier, some guys like to lean on the island roots more. It’s a balancing act on a very thin edge.

KVLT: Much like the blade of a dagger used to slit the throats of you mewling fools as the world becomes awash in your blood.

Bianchi: I don’t like the drums I play, but they said I couldn’t use my xylophone but I still use my xylophone mallets, but it’s hard to play these drums with the mallets so I try to count the beat but sometimes I get confused so I miss some of the numbers.

SCFL: I don’t want to keep you guys too long. I know you’ve got rehearsals to get to. Is there anything else you’d like to leave your fans with?

Bianchi: I love you and where is Bike and I love Bike

Lewis: I guess if I have any wisdom, it’s to always make sure that whoever you’re putting it in is using protection, because kids are a burden.