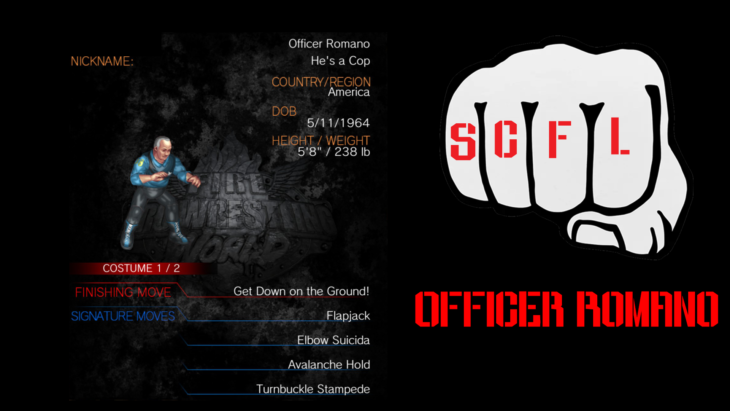 Officer Nate’s second-in-command, Officer Romano is a no-nonsense sort of guy. Originally hailing from Boston, he was driven from his home after Hurricane Bob struck in 1991 and his family home was left in ruins. They set out for the midwest, like many before them had, looking for a way to make a living. Young Salvatore Romano found himself living in Wisconsin, far away from his friends, family and anything that he ever knew and he got into trouble. A lot of trouble. At least midwestern trouble.

This led to his parents shipping him off to military school, where he learned to wheel, deal and politik his way through life. A career as an officer of the law only made sense. Now he’s assisting Officer Nate hunt down Bike Bianchi after the untimely passing of Bradford Culpepper.

Has formed a competent tag team with Officer Richards and made a name for himself not just by knocking people out with his big slams, but by taking to the sky with his Elbow Copicidia.