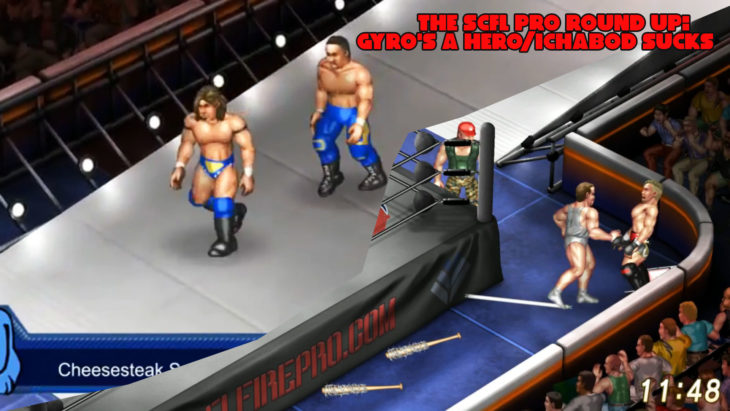 There’s been a lot of movement in the realm of SCFL Pro of late, so we’re here to help you cut through all of it to understand (or at least we’ll all try together) exactly what’s happening in the world of SCFL. So join us, Fire Pro Wrestling World fans, as this week we’re all about Gyro being a hero and Ichabod sucking.

Look no further than Ichabod on Twitter to see the aftershock from this last week’s event. The Alt-Right is not doing well right now, to say the least. Ichabod Adams has been using other members of the Alt-Right to do his dirty work for him since he lost the SCFL Pro World Championship to Bike Bianchi earlier this year, only to fail every step of the way to win that title back. After Gene Greene cost him his shot at the title this last weekend, Ichabod took to Twitter to denounce his [former] friends.

TRAITORS. ALL OF THEM.

I have Ron drafting up a statement RIGHT NOW.#MAGA #TrumpTrain2020

But all was not right in the world. We’ve always wondered about the relationship between Ron Harris and Ichabod, with Ron working as a civil rights attorney in Massachusetts, suddenly sucked into Ichabod’s vortex of hate while seeming apprehensive the whole way. It was pointed out to Ichabod that Ron is technically more successful as a single’s competitor than Ichabod to him via Twitter and, well, he deflected.

But it looks like there might be more to it than meets the eye, as now Adams is claiming that Ron is refusing to draft up a statement for him about the apparent defection of Gene Greene and Federal Bell.

WTF! Ron told me he's too busy to draft up a statement for me about those #TRAITORS Federal Bell and Gene Greene. #SCFL @TheSuperchat

Look, Gyro Supreme might be leading the charge against the Shadow Realm to return Cheesesteak Supreme’s tag team partner, Sanders Suzuki, to this reality, but he’s also a man with needs, wants and desires. He airs these via Twitter and it has become something that everyone is noticing more and more.

Lowkey one of my favorite things about @TheSuperchat is how @SupremeBuick is a legit fan of @RealLucyLawless and supports women's rights. I'd legit buy a Buick from the man (a free fuckin' track suit certainly sweetens the deal). #layersuponlayers #BringOurBoysBack

Huh maybe I gotta do this with Cheese. https://t.co/iOkiQbILIT

These are the role models not that we deserve but need in these troubling times #Yasss #kween https://t.co/fPNUytKBw8

Gyro also provides some insight into the home lives of the Supreme family. It’s not all Buicks, uppercuts, gold chains and tracksuits in Philadelphia for them, instead we see some of the warmer side of the family thanks to the magic of the internet.

That's beautiful!! Philly used to get a capsule toy from the machine at the gym and put the toy under Cheese's pillow when he was depressed. https://t.co/GRYmJ1trov

Hey @BrentSpiner my boy is very depressed and I think a tastefully autographed photograph of Data might cheer him up… Where could a guy purchase such a curio? Thanks

Should I get Cheese a #NintendoSwitch? Will that make him happy?

Everyone Loves SCFL. Thank you.

SCFL Pro is important to all of us. We work incredibly hard each and every week to produce the best possible show and it’s thanks to people like you that we’re able to produce this show. Thank you.

My heart is so incredibly warm right now. For the last 9 months I've been working on a wrestling show that's been utterly bizarre and a ton of work but I love every bit of it. SCFL means something to people and that means a lot to me https://t.co/E7mDqN69ZH pic.twitter.com/8xdAkXdMJf