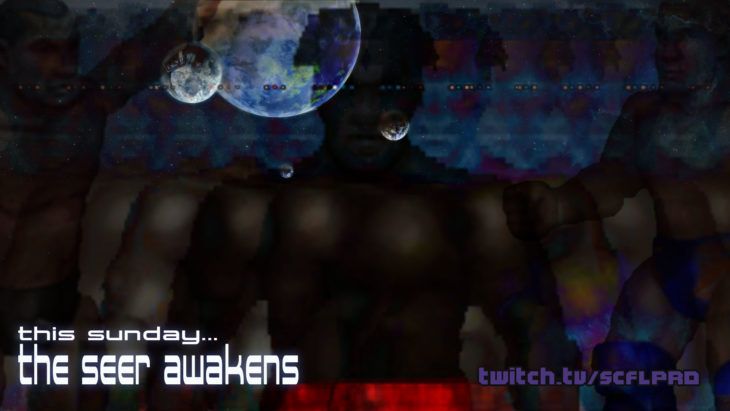 Take a deep breath and relax, at least for a few moments, because Miles Manhoef, The Seer, has awakened. Last week Miles Manhoef did what felt like the impossible in winning the SCFL Pro World Championship in a one-night tournament. First he defeated his career-rival Discussion Davis before moving on to defeat DISGRACED (Freddy Fischer) to secure the title.

Now we find ourselves in the first week of The Seer Era, if indeed that is what this is. Granted, Miles doesn’t have an actual, physical championship to carry around, but we’re told that a certificate has been printed out, which will represent the championship for Miles until the actual, physical title is located. That being said, we’ll most likely see Miles Manhoef — The Seer — this weekend, although it’s not clear in what capacity.

What is abundantly clear is that the SCFL Pro US Championship, the one major singles title that hasn’t been lost, will be defended yet again as Wim Nijman will once again clash with Spencer Morgan. Morgan, the inaugural US Champion, challenged Wim early on, but will now get another shot at the title after winning a triple threat match by knocking out Chuckie Murphy with a spinning neckbreaker. Wim has been on a roll, not just as the US Champion, but even prior as the SCFL Pro Dot TV Championship holder, with the most defenses in history.

In addition, multiple championships will be on the line. Boxing Bianchi will look to defend the SCFL Pro Shoot Championship against worthy challenger Meete Mein. After a poor showing against the COPS in the elimination match from a few weeks ago Boxing will be looking to confirm that he is the toughest guy in SCFL Pro and that his brother’s alleged manslaughter does not define him. Speaking of the police, Officer Boon has been kicking ass and taking names, securing himself a shot at Choochai TrainMTGym’s SCFL Pro Hardcore Championship. Boon has proven himself not just to be a gigantic asshole, but also a tough, mean competitor when he steps in between those ropes.

We can expect the usual Shadow Realm stuff, Bike is apparently in Mexico and the general disarray of an SCFL Pro show this Sunday night at 10pm eastern time, live on twitch.tv/scflpro.