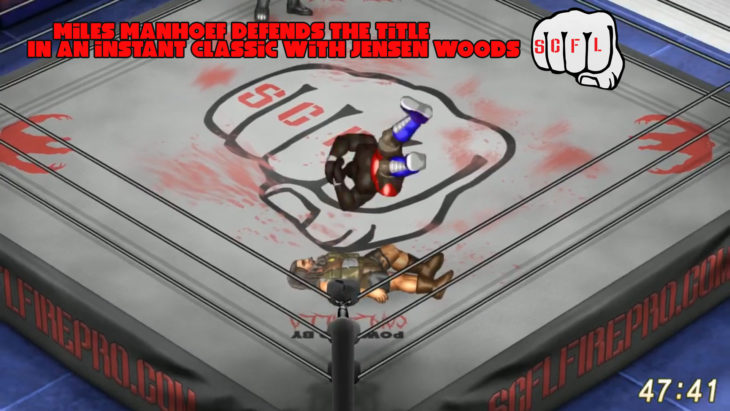 Going into last night’s SCFL Pro event there was a lot of talk about history. Ron Harris ended Fat Jonesy’s historic SCFL Pro Open Scramble Championship reign, OFFERS (Offers Thompson) would tie Wim Nijman with overall defenses of the SCFL Pro Dot TV Championship (although Wim’s were all in one reign), a win over Spencer Morgan would have Wim set a record for the SCFL Pro US Championship for defenses and so forth. Miles Manhoef, of course, made history of his own the prior week in winning the SCFL Pro World Championship. Nobody was thinking much of Jensen Woods, either.

Yet things were not what they seemed.

The show kicked off with Miles Manhoef stumbling into the Blue Room, where he saw Jensen Woods’ tape recorder. Jensen, a man who has been heard and read since his disappearance on April 7th, 2018 at the Belliribuon Civic Auditorium before a capacity crowd. Since then he’s provided comfort and aid to both Justice Turner and Foundation Russo during their disappearances, then relayed messages back-and-forth from what he purported was the Shadow Realm. One of his last messages, on July 22nd, was him uncomfortable with Miles Manhoef, “The Seer,” being activated already. He claimed that the time wasn’t right.

He talked about how he’d need to return at some point, but nobody expected it to be last night. Miles, stumbling upon that tape recorder, found himself face-to-face with Jensen Woods. Jensen’s message was simple, well, for Jensen messages, it was simple: Miles, the Seer, needed to lose the title to Jensen because holding the SCFL Pro World Championship made him too visible to the Hand, who was coming for Miles. Miles needed to lay low.

As you can see, Miles didn’t exactly take kindly to his career-defining journey from undercard tag guy to world champion being undermined by a strange old man in tattered clothes that materialized before him. From what we’ve been able to tell, Miles phase-shifting through space-and-time is what helps his perception. We’ve seen him multiple times flying through the show, including the night that he won the title. On this night, though, we did not see Miles do that. Miles perhaps knew there was truth to the words of Jensen Woods, but was afraid to see for himself, or even worse, stir the ire of the malevolent and mysterious “Hand.”

Instead, we saw a match between the two. That match, mind you, was incredible. Perhaps one of the best pure wrestling matches that we’ve ever seen, with the drama as high as ever. The match went on for 48 minutes before Miles was finally able to hit the Knee Twister Press to secure the victory over Jensen. This, mind you, was Jensen’s actual wrestling debut, which was nothing short of amazing.

That wasn’t all, either, as we saw the debut of what we have to assume is Bike Bianchi’s SCLL, which seems to just be SCFL but in Mexico? The ring apron reads “Homicidio Involuntario” and, well, everything else was virtually the same. The action, though, was truly worth checking out, as a high-paced tag match was able to quickly win over the confused announcers and fans that were watching and expecting the usual SCFL fare.

Spencer Morgan made another go at Wim Nijman, who once again put him away in emphatic fashion by knocking him out with a backdrop suplex. Wim Nijman really does look unbeatable right now. Officer Boon challenged Choochai TrainMTGym for the SCFL Pro Hardcore Championship and even though Choochai roared back with a passion, Boon was able to literally choke Choochai out to secure the first title for the cops.

You can view the entirety of the show below.