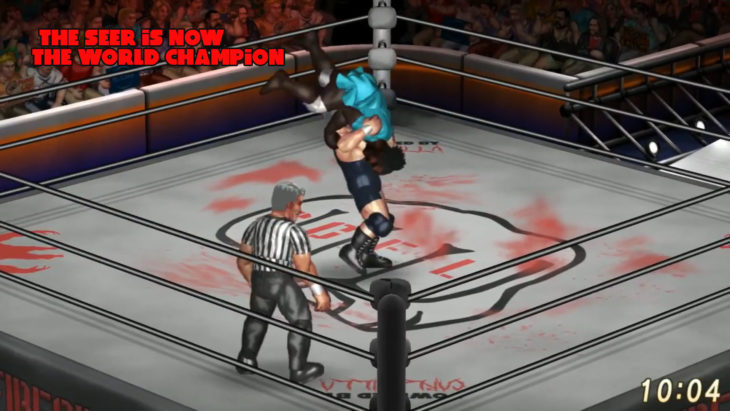 While it’s still not exactly clear what the role of Miles Manhoef is as “The Seer” in the drama that is SCFL Pro and the Shadow Realm, we do know that he’s not only able to transcend space and time, astral project himself out of his own body, but we also know that he’s now the SCFL Pro World Championship holder, even if the physical title is not in his possession. Miles was able to overcome the odds this past weekend in Belliribuon, Iowa and defeat his career-rival Discussion Davis in a shocking knockout victory.

Their third official singles meeting felt a lot like their first two, meaning Discussion went right for Miles’ bad knees, while Miles persevered. It felt like we were on the path to yet another 60-minute draw until Miles Manhoef landed a flying knee drop to the back of Discussion Davis, knocking him out. We learned that Discussion suffered a cracked rib from the move, but it was not the finish that any of us expected. What’s worse, Miles had to have his knees drained directly after the match with Discussion, and came out for the main event for the championship against Freddy Fischer in a hospital gown and his knees heavily bandaged.

Freddy Fischer (DISGRACED) was there with the full support of the Shadow Realm, with Offers Thompson, Charles Dubois and Fragrant Tanaka all breathing in unison while they watched the action in the ring unfold. Miles Manhoef was bloodied up early on in the match and it was looking not just bleak, but dire for the fan-favorite. What makes it truly remarkable is that we have to believe that Miles saw this coming. His role as the Seer means that, well, he can see everything. He knew that he’d put his body on the line, face insurmountable odds, yet he did it anyway. Did we branch off into a new timeline? Did Miles alter our current timeline by seeing the future and changing it this week? That remains to be seen, but what we do know is that he fought back and a Knee Twister Press to the back of Freddy Fischer, followed by a three count left us stunned, breathless and emotionally drained: Miles Manhoef was the new world champion.

Mind you, he doesn’t actually have physical possession of the championship.

Freddy Fischer’s trip to the finals was an interesting one, to say the least, as Ichabod Adams seemed like the odds-on favorite to win the whole thing, only for the Alt-Right to fall apart for the whole world to see. Gene Greene, who had suffered indignity after indignity at the behest of Ichabod, leading to a concussion from a match where Ichabod literally dragged him out of bed and made him fight, decided that enough was enough. The soccer dad stormed the ring and spent the next ten minutes mercilessly beating the tar out of Ichabod while Federal Bell, who was ordered to interfere in Miles vs. Discussion last week, simply stood there and watched.

While Fat Jonesy attempted to make history, Ron Harris of the Alt-Right had something else to say, winning the SCFL Pro Open Scramble Championship for a second time instead. Gyro’s Heroes and the Shadow Realm clashed twice that evening, with Justice Turner taking Offers Thompson to a draw for the SCFL Pro Dot TV Championship, while Blaster Robinson came to the aid of Front Reed, who was able to overcome his fear of bleeding to knock Fragrant Tanaka out with Technology Cooper’s favorite weapon, the barbed wire bat.

The LOST BOYZ and the DSA clashed for the SCFL Pro World Tag Team Championship in what was a disappointing and odd affair, as Aladdin Bell was stuck choking the air while Both Ferrari kept getting his head slammed into the turnbuckles by an unseen entity. Was it the Smoke Monster? The Shadow Realm? Nobody knows.