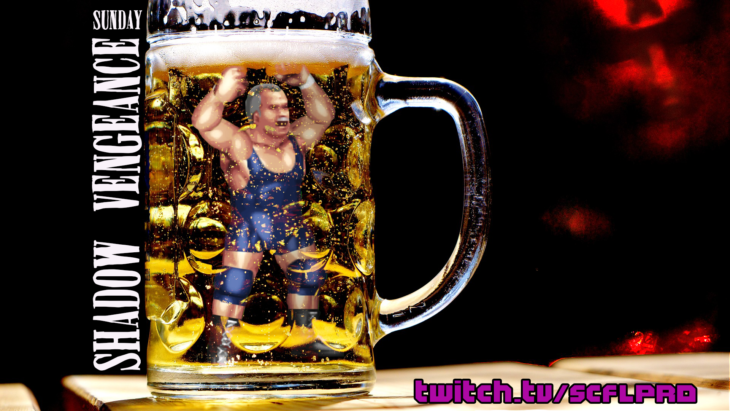 SCFL is in flux. Various factions have risen up to dominate the conversation and title reigns once held almost exclusively by the Supremes, Belly Ribbon, and the Sons of Anger. Essentially, destroyed, the SOA is out of the title picture, with many of their loyalists stolen by the Shadow Realm, dead, or worse (stuck with a beach gimmick in the cold Beliribon November). The Cops, seeming to ignore their superior officer Nate’s wishes into a continuing investigation into the alleges manslaughter of Bradford Culpepper months ago, have become one of the most successful factions in all of SCFL.

This Sunday, The Cops take on the LOST Boyz for the SCFL tag team titles, while officer Boon, the first person to simultaneously hold two titles (and defend them both), will, in turn, defend both his shoot title and his hardcore title in the same match. Two titles on the line, one match, with Belly Ribbon’s Zoning Zhang hoping to continue history, or perhaps a new normal.

And what of the Shadow Realm, with Freddy Fischer deciding to actually use the shower and clean off his spooky makeup for some reason in order to come back and claim the world title he believes is rightfully his (despite Let Liu taking his name and persona to win the title)? Offers Thompson is two wins away from tying the Wim Nijman, and Freddy Fischer will attempt to be his foil after defeating (or retaining) against some of SCFL’s best.

In this surprisingly stacked SCFL show, these big matches are just a few that are offered.

A Missouri became the 5th person ever to defend the Scramble pan, and now the hardcore maniac will attempt to retain to become the third person to ever defend the scramble pan twice.

Hardcore hero, and Gyro’s Hero, Front Reed will rematch Fragrant Tanaka of the Shadow Realm in a highy-anticipated hardcore match, especially after last week, when Sledding Bianchi stopped the match early because he couldn’t handle the blood any longer.

There’s one more match tonight, and it’s never been done before. 8 people in a cage, no escape, and the first to get a pinfall will be the number one contender to Computer Collins’ U.S. title. This show is stacked! See you Sunday night at 10:15pm est on https://www.twitch.tv/scflpro

Oh, and we’re supposedly getting election day results in. Finally.