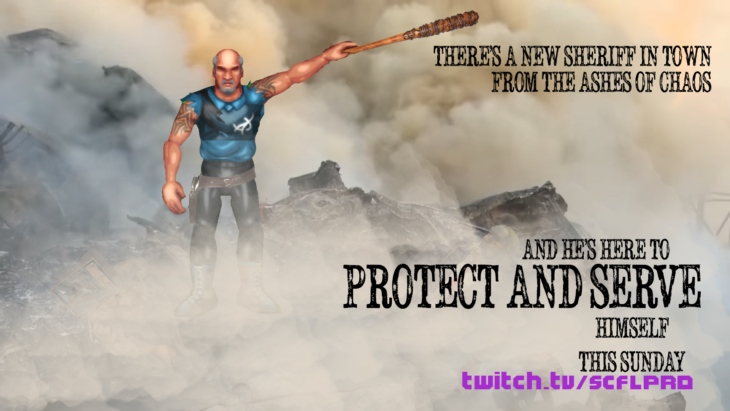 After the one-year anniversary of SCFL, we’re left with a new, familiar world champ in Discussion Davis, as well as another COP as Scramble champ, showing the domination of that faction even as Nate becomes Bike Bianchi fully and completely. In year two of SCFL, things change, and they stay the same, but things never stop moving. That’s obvious for tonight’s show, as we have FIVE title fights.

A shoot title fight between Officer Boon and an unknown entity. It’s not even a mystery opponent, it’s just a lack of planning it seems it a relatively thin-but-dangerous division.

Patty Acosta and October Schmidt will put the hardcore tag titles – a framed picture of The Public Enemy – on the line against the suddenly relevant hardcore maniac Gordon Garabaldi and Maniac Missouri, who earned the shot after a hardcore tournament on The B Show

Gyro Supreme and Cheesesteak are a bundle of emotions, and will fight the returned SANDERS and Dubois from the Shadow Realm. How will Cheesesteak react? What is SANDERS doing here?

Oh, and a rematch between Karate Hendrix and Weather Walker will go down for the no.1 contendership for the U.S. title.

Finally, Discussion Davis will defend his new world title against diligent referee Picaporte Rodriguez, who did an admiral job reffing the tournament and was rightfully awarded a title shot in typical SCFL fashion.

It’s a stacked show this week. It really is.