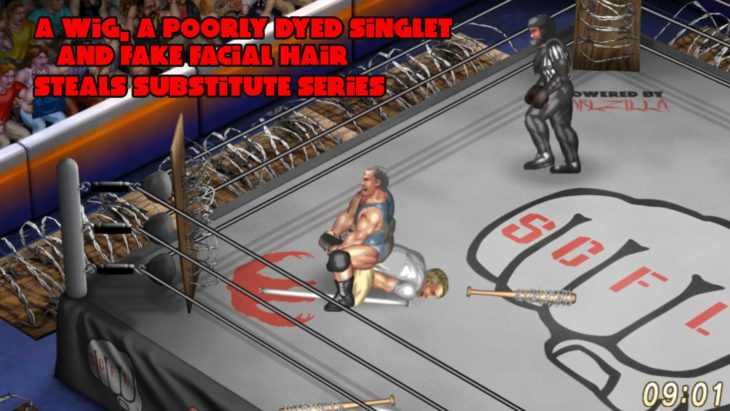 In the short history of the SCFL Pro Substitute Series there has been one name that has dominated everything: Federal Bell. So, heading into the 2018 Substitute Series, even with a head injury, he was the odds-on favorite. Yet, even with a generous bye in the tournament, he found himself at the mercy of a boy. A boy that SCFL fans know and love in Let Liu. Only it wasn’t Let Liu. Not really.

No, instead it was Let Liu in a poorly-dyed singlet, a bad wig and what looked to be makeup smudged on his lip, posing as Freddy Fischer. What made him want to mimmick a failed substitute teacher is beyond anyone’s comprehension, yet there he was. He kicked things off by defeating Mike Miller in a back-and-forth battle that had the fans on the edge of their seats. These people wanted Liu to pick up the victory.

Three new subs made their debuts in Drea Montebank, Samantha Sugar and Patty Acosta. The devious Ichabod Adams scored victories over Mountebank and Acosta to make his way to the finals, while Let Liu defeated Federal Bell, then Samantha Sugar to make his way to the finals. To say that it seemed impossible for Liu to pull this off was an understatement. Adams, known for not only being an awful human being but also a sound competitor, was denied any convenience in his match. He didn’t control the referee, his friends weren’t at ringside and the Fixers installed deathmatch equipment to give an edge to Liu.

That edge was just enough for our boy — our boy — to pull off the victory, his hand raised after using his own finisher, the Community College Killer, on Adams.

We took things one step further in the main event, with the SCFL Pro Dot TV Championship on the line where Karate Hendrix was kneed in the gut by Kurt King and began coughing up blood. The match went a bit further where an overhead gut buster on Hendrix was too much for him to handle and the match was stopped, making Kurt King the NEW champion.