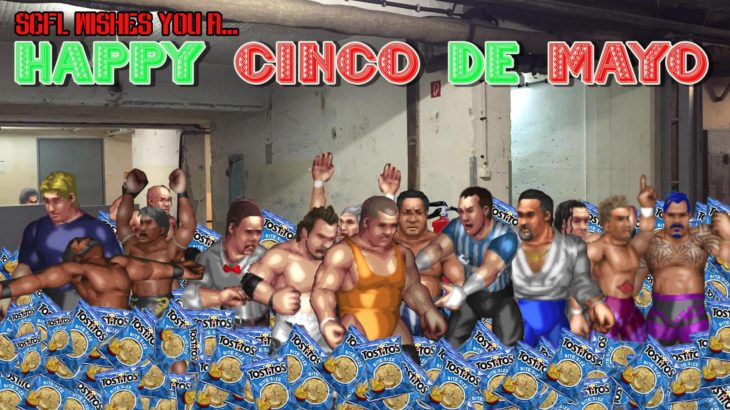 Wow, what a week in SCFL Pro! There were some unexpected outcomes, mostly due to referee Ron Harris developing a penchant for count outs.

No matter, there were still amazing moments. The night kicked off with a Scramble match that might be the best opening Battle Royal in SCFL history. For a good fifteen minutes, the final three of reigning and defending champ Ron Lewis, Gary Bollea, and eventual winner, Brick Roberts, battled back and forth.
In further title action, Boxing Bianchi defended his Shoot title against the tiny-mouthed Zorastriani Brown. Boxing emerged victorious after an intense striking exchange culminating in Bianchi landing a huge rolling elbow that finished off Brown. In another MMA contest, Nightsbane KVLT unleashed a flurry of clinch knee strikes on Ricky Robinson in the second round, putting away the flamboyant college student.
Both Ferrari continued his quest for vengeance as he battled Gyro Supreme in a surprisingly one-sided contest. Ferrari nailed a huge 630 senton splash to put away Gyro.
As stated earlier, count outs marred some of the action, much to the disappointment of the fans. Giovanni Dinner and Weather Walker looked to be engaging in a classic battle of powerful heavyweights, with both men hitting monstrously big moves. However, a distraction from Momma Dinner and clever use of scoop slams on the outside led to Giovanni standing tall in the ring as head referee Sledding Bianchi counted out Walker.
In Trios action, the Alt-Right of Gene Greene, Piotr Petrov, and Federal Bell defeated the Socialist contingent of Torvald Harrallssen, America Wright, and Federal’s son, Aladdin Bell. Of course, if the Alt-Right is involved, that means Ichabod Adams was there, as he skulked on the outside and looked to be shouting orders to his brother-in-law and referee, Ron Harris.
The night was ultimately led by the Hardcore division, though. Captain White and DuBois braved the perils of barbed wire in a grueling match that saw White emerge victorious. In the most insane contest of the evening, Fragrant Tanaka and Front Reed battled inside and outside the ring, including several minutes on exploding, barb wire-covered boards. Both men triggered the bombs several times, but in the end, Front Reed was able to persevere and submitted Tanaka with a roll-through camel clutch.