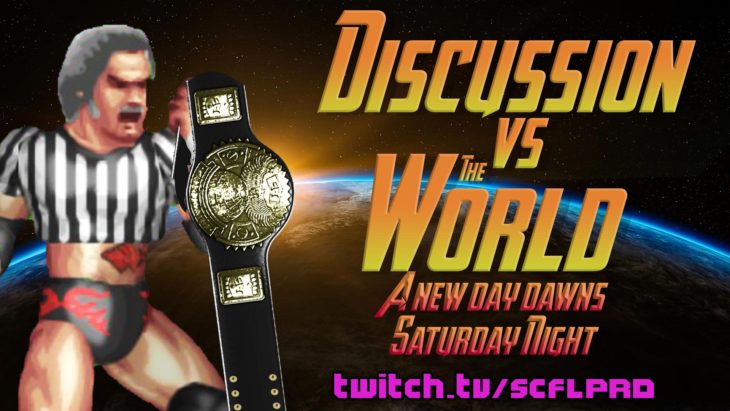 Hello again, SCFL fans! We’ve got a fantastic night of fights on schedule, and it’s on a Friday night! Live, on twitch.tv/scflpro starting at 11:00 PM ET, SCFL Pro presents an exciting night of pro wrestling action.

After a grueling, 41-minute match last week, brand new Opening Scramble champ Brick Roberts will have to defend his frying pan the same way he won it, in an eight-man Battle Royal! Can Brick successfully retain, or will a new name lay claim to the nonstick skillet?

Due to unforeseen circumstances that must never be mentioned directly, last week’s Dot TV title match had to be cut short. However, both challenger Garden Greene and champ Wim Nijman are more than happy to #RunItBack so that’s exactly what they’re going to do. Wim looks to further establish himself as a Dot TV champion par excellence, while the violent vegan is looking to usurp that crown.

Last week, in Trios action, the Alt-Right in the form of Gene Greene, Federal Bell, and Piotr Petrov defeated the Socialist Squad of Torvald Harrellsen, America Wright, and Bell’s son, Aladdin by way of count out. This week, Bell and Petrov will be taking on Wright and Bell in more conventional tag team action, and hopefully the fast counting Ron Harris won’t be assigned to officiate this contest.

The next bout keeps things in the tag division, but adds an element of danger, as Turgid Delmonico and Gary Bollea will take on Blaster Robinson and Baby Hayes in a hardcore match. All four men are serious bruisers, and that’s before barbed wire, steel chairs, light tubes, and more get involved.

Speaking of violence, MMA is on deck next, as former MMA champ Wigwamm Watanabe brings his low blow skills to a head against former Scramble champ Ron Lewis.

Despite mixed success in hardcore tag matches, Puncho Baggins appears to have embraced the extreme lifestyle, as he’s going one-on-one with Offers Thompson in a deathmatch.

Tapas Tiempo looks to be moving on to stage two of his plan to combat the Sons of Anger, as he’s recently aligned himself with former member, Gordon Kuntz. Kuntz is now taking on Kurt King, who Tiempo looks to be recruiting as well. Things are certainly getting interesting here.

In more hardcore action, Gordon Garabaldi will face off against Earl Vontrell in another death match.

Weather Walker lost by count out to Giovanni Dinner, and he’s not taking that loss laying down. Walker has requested a rematch, and it’s been granted. Walker was arguably close to victory before Giovanni’s Mama got involved. It’s unlikely she’ll be barred from ringside this week, so Walker will have to simply account for her presence and adjust his gameplan.

Spencer Morgan had to make a quick exit in a tag match with Raoul Hernandez last week. He explained himself as having to attend to some urgent Men’s Warehouse managerial issues and has begged forgiveness from Hernandez. Now, Team SUITS will look to reconcile in the ring as they take on the High Seas, of Captain White and Algorithm Schneider.

In even more tag action, the LOST Boyz of Both Ferrari and Until Robert are finally reunited after Robert suffered an injury several weeks ago. The two Naveen Andrews fanatics still have their sights set on a Tag Title showdown with Computer Collins and Foundation Russo, but this week, they’re taking on the former champs, Gyro and Philly Supreme. Ferrari recently took out Gyro’s nephew Cheesesteak to get his attention, and last week defeated Gyro himself in singles action. This should be a great match!

In the main event, we only have half of the matchup set. New World champ, Discussion Davis, posted that he intends to be a fighting champion, and his first order of business is to launch the Discussion Davis World Title Open Challenge. He says that once he hits the ring after the penultimate match, whoever walks out from behind the curtain first will have a championship opportunity. Number one contender Ichabod Adams must be steaming mad about that revelation.