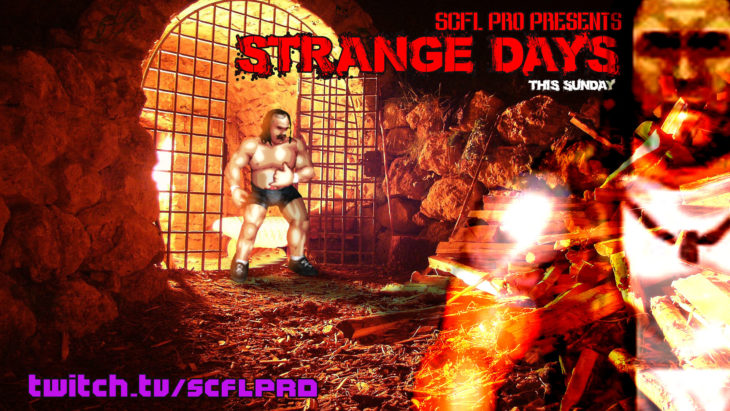 Well, here we are. SCFL Pro returns on Sunday evening with yet another show. Once again, we’re at a transition point. Miles Manhoef, the SCFL Pro World Championship holder, is missing. Will he ever return? Will he ever be the same? There seems to be no answer to these questions, only more questions that arise. Yet, here we are, continuing forth with a main event worthy of the biggest of shows as SCFL Pro US Championship mug-holder Wim Nijman will square off with Computer Collins.

While we wonder about the whereabouts of Miles Manhoef, it seems like we’ve located Bike Bianchi in Mexico. The last few weeks have seen a rogue broadcast assume control of our board, beaming to our viewers live on Twitch some actually impressive wrestling action from Mexico. The promotion name is, apparently, SCLL, with everything looking exactly like SCFL, only en Mexico. Assume it’ll happen again because we have no control over anything at this point, no matter how hard we try.

What does this mean for Nate and the Cops? That’s another valuable question that we simply cannot answer. Officer Romano and Officer Richards will fight former SCFL Pro World Tag Team Championship holders in Piotr Petrov and Federal Bell, with a possible shot at the LOST BOYZ when they’re healthy on the line. Officer Bertrand holds the SCFL Pro Open Scramble Championship right now and Officer Boon holds both the SCFL Pro Shoot Championship and SCFL Pro Hardcore Championship. He’ll be forced to defend one of those titles this week, as he’ll fight former SCFL Pro Hardcore Champion Technology Cooper in what should be a bloody affair.

As for the Shadow Realm, OFFERS (Offers Thompson) still holds the SCFL Pro Dot TV Championship and will look to defend against a member of Gyro’s Heroes here this week, but we aren’t sure exactly who yet. Last week we saw the Heroes destroy the Jonesys (Fat Jonesy and Lil Jonesy), who are surrogate members of the Shadow Realm. This week Gyro Supreme should be in action yet again, looking to send a further message to the Shadow Realm, especially after his big win over Jensen Woods last week.

Jensen, well, let’s hope that he has a clue as to what’s going on with Miles Manhoef, because our world champion is missing.

Join us this Sunday night at 10pm eastern at twitch.tv/scflpro.