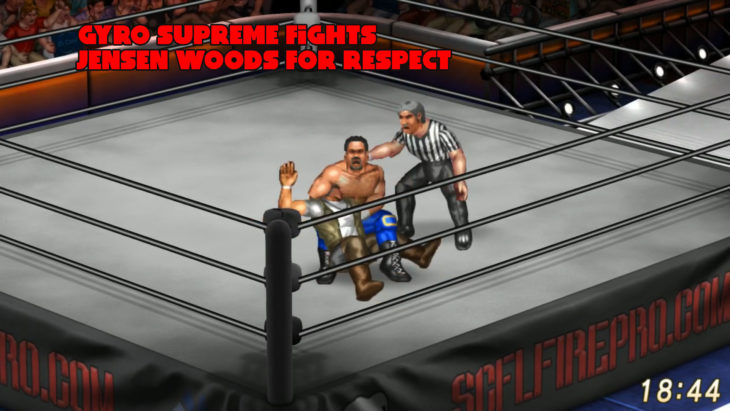 In perhaps one of the more confusing turns in recent history, the Jonesys (Fat Jonesy and Lil Jonesy) have taken a turn towards sympathizing with the Shadow Realm. As such, this week’s big match was a steel cage match billed as the “Cage of Death,” featuring the Gyro’s Heroes team of the Bruisers, Justice Turner and Blowhole Bernard, defending the SCFL Pro Hardcore Tag Championship against the Shadow Realm. Without knowing what team would be representing the Shadow Realm the Bruisers were at a distinct disadvantage, but everyone was confused when the Jonesys came out. What ensued was a long, brutal beating that saw a lot of blood spilled and the Jonesys take an unprecedented beating.

The Shadow Realm has not shown much in the way of weakness thus far, but letting the Jonesys align with them has been an interesting move, to say the least. Chalk one up for Gyro’s Heroes in overcoming the Jonesys in the Cage of Death.

The main event saw something, well, different. Gyro Supreme has been gearing up his squad with secret techniques taught to him through a mysterious “guide” that Jensen was able to transport from the Shadow Realm, as well as creating amulets that protect them from the — as Jason has deemed it — green shit that they spit out now that can temporarily blind and confuse their opponents. So when Gyro found out that Jensen was back he knew that he had to introduce himself.

Perhaps Gyro’s ego was wounded a bit, as Jensen had not specifically sent the guide back to Gyro, just in general. Jensen was confused as to who Gyro was and what he was expecting to him, instantly dismissing the idea of working together against the Shadow Realm. Gyro, wounded by this, quickly defaulted to challenging Jensen to a match to prove himself worthy of Jensen’s partnership, which Jensen once again seemed confused by.

For the second week in a row Jensen was pulled into something that he probably didn’t want to be a part of, but seems to be a part of his job description as the ghost hunter of record of Beliribuon, Iowa. The two men battled for nearly thirty minutes, exchanging holds and Gyro even hitting a few of his Woke Gyro Bombs, surprised at how powerful Jensen was. While respect was on the line, neither man held back and perhaps Jensen was given a better impression of what has been going on since his departure, as Gyro was able to lock in the Gyrolock on the ground and Jensen was forced to tap out. It was a technical affair that followed the bloody Cage of Death, showing that the battle against the Shadow Realm can take many forms within the Beliribuon Civic Auditorium.

Offers Thompson (OFFERS) once again defending the SCFL Pro Dot TV Championship in dominant fashion, which begs the question: who can defeat this man since he returned from the Shadow Realm?

After weeks of wondering, and weeks of trips to Mexico during our events, we finally got a glimpse of what we believe to be Bike Bianchi in Mexico under the alias Ciclista Mascara. He fought a masked man named ZODIAK before putting him away in a very Bike-like fashion with his jumping knee strike.

Computer Collins and Karate Hendrix had a brutal brawl that devolved into chaos early on, Wim Nijman, the SCFL Pro US Championship holder, was unable to keep the peace as referee and instead the two fought all over. Computer Collins reached down deep inside and channeled his inner beast when he landed a crazy punch rush that put Karate Hendrix down and out, with Computer showing the champion that he didn’t even need him to count the fall.

As for the other faction gaining power, the Cops made their presence shown in a big way with Officer Bertrand winning the SCFL Pro Open Scramble Championship while Officer Boon, the SCFL Pro Hardcore Championship-holder, was able to defeat Boxing Bianchi for the SCFL Pro Shoot Championship, making him the first dual-champion in the promotion’s history. It all happened inside of a cage, not a cage of death, but a cage in the basement, which sounds a bit more gross, honestly.