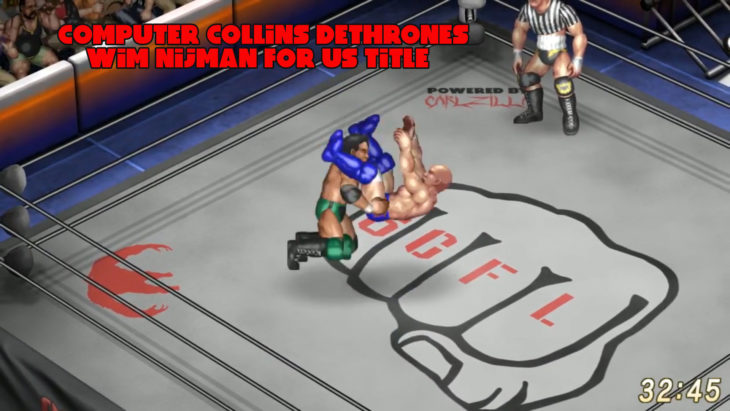 Long live the king, for he has been dethroned with a new king in his place. This past weekend at SCFL Pro’s Strange Days we saw the end of an era as Wim Nijman was defeated for the SCFL Pro US Championship in a shocking 32-minute long classic between two of the heaviest hitters in SCFL Pro history. Back in January, before Wim went on to make history with two huge title reigns, Computer Collins defeated Nijman in short order.

It was this loss that, in part, pushed Wim Nijman harder than ever before and led to him absolutely demolishing everyone in his path. This led to a ten-defense SCFL Pro Dot TV Championship reign and his SCFL Pro US Championship reign that lasted for five defenses and saw him take on all-comers. Many went into this match expecting yet another good effort from Wim’s competition, but ultimately another victory for the seemingly-unstoppable Dutchman.

Computer Collins had something different in mind. The former SCFL Pro World Tag Team Championship holder has yet to hold singles gold in SCFL Pro and he came into this with his fists flying all over the place. It quickly became clear that Wim had a challenge in front of him. Computer Collins quickly began throwing Wim all over the place, only for Wim to fire back with his signature offense. Wim seemingly had recovered enough to lock in the omoplata crossface only for Computer to keep fighting. A series of high-impact moves began to wear on the champion’s neck, which set up a Tiger Driver for the three count after a thrilling, back-and-forth finishing sequence where either man could have picked up the win. This match has to be seen to be believed.

Officer Nate felt that he was closer to finally nabbing Bike Bianchi, but found himself facing off with Let Liu. Things came to a head when both men locked horns in the main event, with Nate clearly losing his grasp on reality and perhaps believing that this was really Bike Bianchi? We know that Bike Bianchi is in Mexico right now as we were once again treated to a set of matches, including a must-see trios bout that once again saw some of the stars we’ve seen over the last few weeks shine yet again. But, as for “Bike Bianchi”/Let Liu/Bikelet, whatever you want to call him, he was able to get the better of Nate, hitting the Community College Killer for a surprise upset over Nate.

In other action we saw an absolutely bonkers hardcore tag team match as the teacher team of Patty Acosta and October Schmidt fought the Shadow Realm team of Charles Dubois and Freddy Fischer, pushing themselves to the absolute limit. It was a bloody war that saw October Schmidt try really, really hard after sort of phoning it in with Patty in his last few appearances. When he found out that the public was disappointed in himself it clearly lit a fire under him and this bloodbath ended with October’s Last Sunset on Freddy (DISGRACED) for the three.

In other hardcore action, Officer Boon defended the SCFL Pro Hardcore Championship against Technology Cooper in a match that was heavily-anticipated, only for Boon to stab Cooper in the face to knock him out in 1:40.