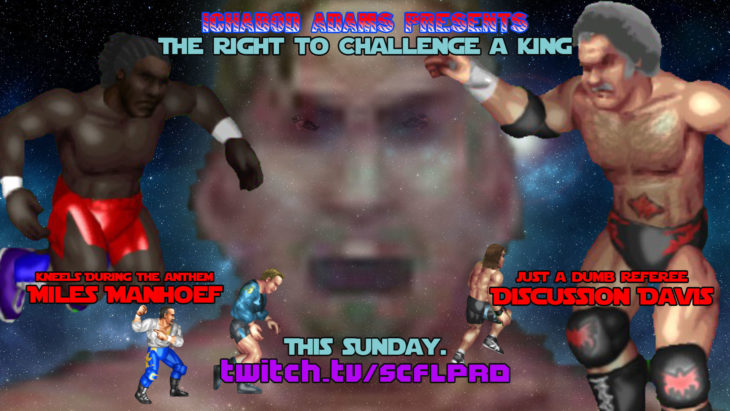 After an unnamed Fixer was caught in the pipes at the Belliribuon Civic Auditorium, causing a massive rupture, flooding and an unrelated minor outbreak of scurvy resulting from a few of the wrestlers following Liutrition, SCFL Pro (on Fire Pro Wrestling World!) returns on Sunday night, September 9th on Twitch dot tv! We pick up right where we left off: Bike Bianchi has most likely committed a manslaughter on Bradford Culpepper and Officer Nate finds himself hunting down the fugitive. Honestly, if Bike would just talk to Officer Nate already this would probably all be over with and Bike would most likely see very little in the way of punishment. Running is much, much worse for everyone involved.

Yet, here we are. There you are.

Let Liu as “Freddy Fischer” was set to defend the SCFL Pro World Championship against Ichabod Adams on our last show, only for the confused bus terminal guy to announce “Freddy Fischer to the ring,” which brought out both Freddy Fischers. This was bound to happen sooner-or-later, especially without Bike Bianchi’s delicate, model hand to guide the confused and vitamin C-deficient SCFL fighters on the right path. Of course, Let, in the throes of scurvy, found himself listless and his body craving sustinence, left the match on a whim, title in hand, and walked to the grocery store. It was there that he accidentally left the title while he pursued the nutrients that his body has been screaming out for, which left everyone in a strange situation. The champion cannot lose their title via countout, which is how Let lost. But the champion doesn’t need to be pinned in a triple threat match, it’s whomever wins the match. Ichabod won the match. So Ichabod Adams considers himself the world champion now, and thus, has issued a challenge levied at Miles Manhoef and Discussion Davis. The winner of a bout between them gets a shot at Ichabod and whatever title he thinks that he has.

The last time they met it was stunning, a sixty-minute odyssey that saw no clear winner. So now what? They’ll meet again and hopefully there is a winner.

The SCFL Pro Dot TV Championship has found its way home, sort of, to Offers Thompson (as OFFERS), as he defeated Kurt King last time in a stunning display. This week he’ll be challenged by SCFL Pro co-founder Baby Hayes, who happens to be writing this piece right now. Can Baby Hayes overcome the Shadow Realm’s finest? Hopefully without injury!

Things will finally come to a head with the investigation of Officer Nate and his band of COPS as we’ll see an elimination tag bout between the Cops and Team Belly Ribbon. This is the first real sign of unity that we’ve seen from Belly Ribbon since Bike’s manslaughter and flight.

All of this goes down tonight at 10pm eastern at Twitch.tv/SCFLPro. Please join us for a night of action-packed, strange Fire Pro Wrestling World action.

Because everyone loves Fire Pro, right?