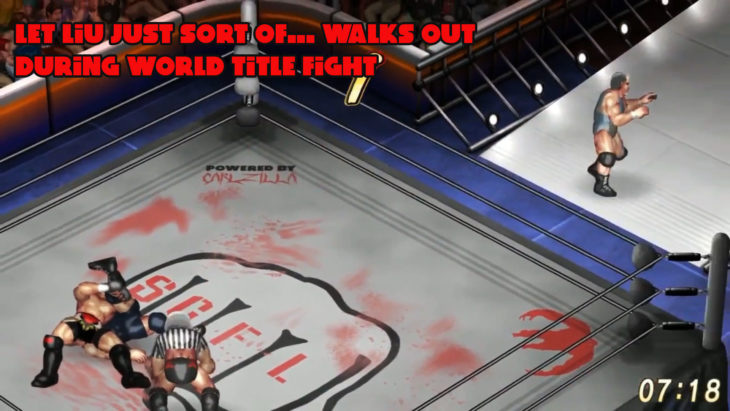 Ignore the fact that these results are from last week. Last week was a trying week for all of us here in Beliribbuon, Iowa. Power outages, power surges, lakes of fire, sharks, the works. Maybe one day this will all be explained in a tell-all book. Probably not. But Let Liu, the SCFL Pro World Championship holder known as “Freddy Fischer” is leading us into an uncertain future, that much is clear.

The MATCH OF THE CENTURY happened in the main event, but when the strange bus terminal guy came to announce that “Freddy Fischer to the ring please,” he forgot to specify which one, which in SCFL Pro is very, very important. That means that both DISGRACED (the actual Freddy Fischer) and “Freddy Fischer” (Let Liu) came to the ring to fight Ichabod Adams in the MATCH OF THE CENTURY. Then, of course, Let Liu just sort of left the match after a few minutes, unable to sate his hunger while wrestling. Ichabod and Freddy looked on, fought on, while our cameras caught up with him walking through the parking lot, down the street and to the nearest grocery store.

Apparently he was really hungry. He was counted out, or disqualified, it wasn’t immediately clear, but he eliminated in the match through a means that the title doesn’t change hands. Although nobody told the combatants in the ring, so they kept fighting, most likely not for the title. Nobody is really clear on that. Ichabod hit a leaping kick to the back of Freddy’s head and cinched in the Liontamer for the submission victory, but there was no title to award him. It would be sad if it were anyone else.

The strange fate of the SCFL Pro World Championship wasn’t decided in that much, but instead, the title was left in the aisle of the store. Nobody knows what that means.

In other action Choochai TrainMTGym defended the SCFL Pro Hardcore Championship against Garden Greene, Both Ferrari defeated America Wright in a prelude to the SCFL Pro World Tag Team Championship bout that is forthcoming, Officer Romano and Officer Richards were once again successful against a Belly Ribbon team, this time knocking out Foundation Russo for the victory. Officer Boon fought Front Reed in a deathmatch that saw Front afraid to get hardcore after his string of injuries.

If you missed out on the SCFL Pro World Championship bout and other, high-level Fire Pro Wrestling World action you can catch all of it here, via our YouTube channel.