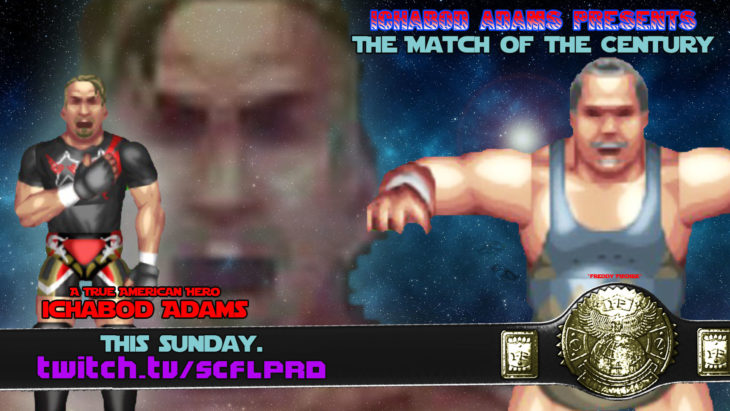 Last week we saw the unthinkable in SCFL Pro: Ichabod Adams and “Freddy Fischer” (Let Liu) teamed up and defeated Miles Manhoef and Discussion Davis in tag team action. Unthinkable because of who won and lost? No. Unthinkable because of Let Liu continuing to side with Ichabod Adams? Very much so. The Alt-Right was out in full force and it appears that Let Liu has been embraced by the group, although it all seemed like a ploy for Ichabod Adams to get his contractually obligated title shot promised to him months ago. Now Ichabod promises the “Match of the Century.”

This week it's all about me. I'm bringing you the match of the century, #SCFL! @TheSuperchat

So this week, somehow, some way, Ichabod Adams presents Ichabod vs. “Freddy Fischer” for the SCFL Pro World Championship.

It really does appear that Let Liu is a lost cause, albeit one that not many understood in the first place. Will this charade continue? We’ll have to wait and see.

In addition, the SCFL Pro Hardcore Championship is on the line, for the first time in a very long time, not involving Technology Cooper. Choochai TrainMTGym will defend his title for the first time since winning it in an absolute slugfest, this time against unconventional challenger Garden Greene. Garden Greene, known for his participation in SCFL’s only knife fight to date, once again pulled a fast one in his match with Wim Nijman last week. Before the deathmatch apparatus could be torn down he dragged the SCFL Pro US Championship mug holder out to the ring, bloodied him up and the match began because nobody here pays attention to what should be happening and just run with it.

I guess that’s fight, right? Especially because Bike Bianchi, who is supposed to be in charge here, is on the run from Officer Nate and the rest of the police force. He’s only wanted for questioning in the death of Bradford Culpepper, but him running like this doesn’t exactly make him look good, doesn’t it? Because, look, the innocent don’t run from simple questioning.

We’ll also see the newly-minted SCFL Pro World Tag Team Championship contenders DSA member America Wright fight Both Ferrari in what should be an interesting clash of styles before the two teams meet for the titles.

Never mind the Shadow Realm is continuing to march towards doing, well, something. Has Gyro Supreme assembled his squad of Gyro’s Heroes? Hopefully we’ll have answers for you this Sunday night at 10pm eastern time live at twitch.tv/scflpro. So join us for Ichabod Adams Presents the Match of the Century and hopefully we’ll see him get ground to a pulp.