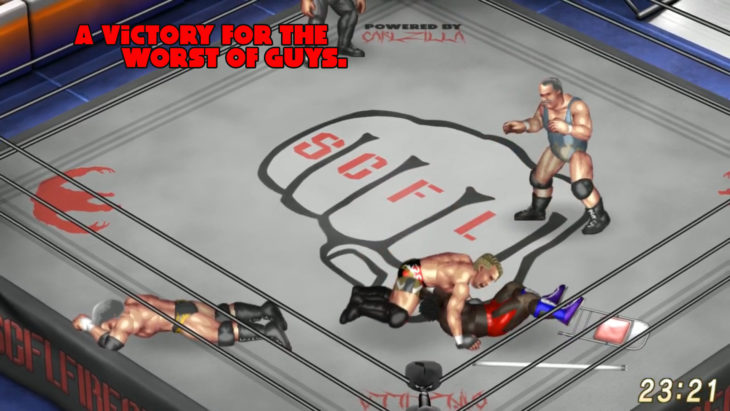 If Miles Manhoef truly is “The Seer” and has the ability to see anything and everything then there has to be a reason why he quit against Ichabod Adams this week, right? Because everyone is really concerned here that the Alt-Right, led by Ichabod Adams, have not just lured Let Liu as “Freddy Fischer” to the dark side, but that Let might actually like it. He’s been sheepish about commenting about his status of late, instead giving his usual, terse statements.

But what does it all mean?

It means that during the main event, while Piotr Petrov distracted Sledding Bianchi, Let Liu set Miles up for Ichabod to rain down knees to his forehead, with Miles almost immediately tapping out after a hard-fought match. To say that it would chaos would be unfair. Everyone knows that Discussion Davis isn’t a great tag team partner, or else Philly Davis would have actually worked. Although everyone wanted it to work, it didn’t.

What happens next with the SCFL Pro World Championship is anyone’s guess here, but things aren’t looking good with the Alt-Right’s involvement.

There was increased police action on this show as well, as Officer Bertrand, Officer Boon, Officer Richards, Officer Romano and Officer Nate all made their presences known, albeit in confusing fashion. Nate beat up Xylophonist Bianchi, Officers Richards and Romano put on a blistering tag team bout against team Belly Ribbon’s Especially Esposito and Immediately Ito, a 39-minute classic that saw the cops win big, but why? Officer Boon may have had a stroke inside of the ring during the scramble, then eliminated himself when he was on the verge of victory, proving himself to be in the same class as Gene Greene when it comes to not just being an asshole, but eliminating himself for no real reason.

The Bruisers (Justice Turner/Blowhole Bernard) secured their SCFL Pro Hardcore Tag Championships yet again, this time with a win over the High Seas in dominating fashion. Something, of course, strange happened, as before the Fixers could tear down the deathmatch paraphernalia, it looks like Garden Greene, upset over Wim Nijman granting a shot to carnivore Patty Acosta before him, assaulted Wim Nijman, the action spilling into the ring as Wim was busted open by the time our cameras got to him. The SCFL Pro US Championship was defended in an impromptu deathmatch, with knives everywhere, as Garden Green and Wim Nijman battled for over 20 minutes before Wim made a heroic comeback after losing Front Reed levels of blood to tap out the vegan.

The DSA also possibly secured themselves a shot at the LOST BOYZ while Wigwamm Watanabe was able to put Samantha Sugar away in a confusing shoot bout.