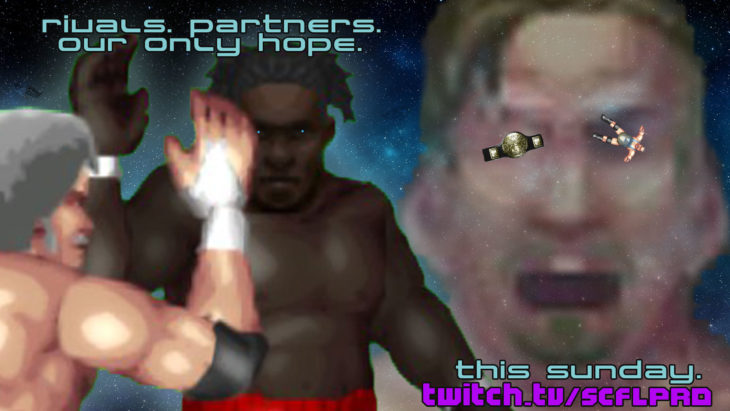 This Sunday evening SCFL Pro (ft. Fire Pro Wrestling World) returns with more crazy, zany, depressing(!?@!) action. If you’ve been following closely you’re well aware of the harrowing developments in the life and times of Let Liu (“Freddy Fischer”), who has captured the SCFL Pro World Championship and was openly courted by the Alt-Right leader Ichabod Adams last week. Now, just a week away, after a sham of a title defense for Let, he’ll be teaming with Ichabod to fight former champion Discussion Davis and Miles Manhoef, constant thorn in the side of Adams.

Many fans seem in shock over the development, unable to believe that Let would turn like this, somehow forgetting that Let is mostly a blank slate when it comes to emotional responses to adult situations. Yet, here we are. Once again Discussion Davis and Miles Manhoef are forced to team up to take on a challenge from the Alt-Right, but can they continue working as a team?

In addition, SCFL Pro US Championship mug-holder Wim Nijman will once again be looking to defend that title. Wim has been making short work of the opposition, finishing former champion Spencer Morgan in a matter of moments and then knocking out Food Place proprietor Patty Acosta. Word has it that Wim has been rushing through his matches due to a recent Shadow Realm occurrence during one of his matches, with him shook to the core and doing whatever he can to avoid being possibly taken into the Shadow Realm. Does that mean he’d work with Gyro in Gyro’s Heroes? Nobody is quite sure yet, just that he’ll fight Garden Greene in what is yet another anticipated bout this Sunday night.

Where is Bike Bianchi? Did he murder Bradford Culpepper? These are the burning questions that Officer Nate has been dying to have answered, while our viewers feel that Bike has, you know, probably at least committed a manslaughter. Will Nate ever watch the tape and see what happened? Where is Bike? We’ll find out more this week.

Join us live at 10pm eastern at twitch.tv/scflpro for all of the best Fire Pro Wrestling World action that there is to see.