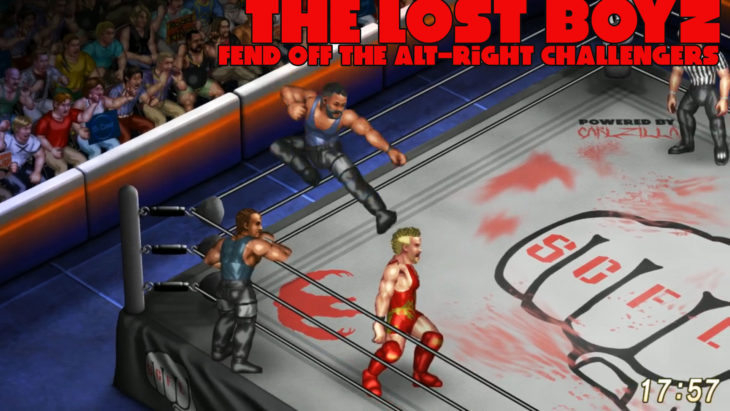 This past weekend SCFL Pro returned to Twitch.tv for a blistering, strange show, as always, featuring the LOST BOYZ defending their SCFL Pro World Tag Team Championships against former champions, the Alt-Right. Federal Bell and Piotr Petrov were worthy challengers, putting forth an honest effort against the reigning SCFL Pro tag champs in the LOST BOYZ, who were decked out in Sayid-inspired ring gear for this challenge. There were a lot of dramatic moments, with Petrov and Bell expertly cutting off the ring throughout most of the bout, only for Until Robert and Both Ferrari to show the heart and courage that brought them to the table.

It was the arrogance of Piotr Petrov that eventually led to the finish, when he refused to put Both Ferrari away, or tag out, and was caught from an unexpected rollup for the victory. Once again proving that sometimes it’s just better to finish off smart opponents like the LOST BOYZ instead of toying with them after a tough match.

Our SCFL Pro World Championship holder, “Freddy Fischer” (nee Let Liu) had an interesting night as well, with him being openly courted by the Alt-Right. Ichabod Adams presented him with a copy of Milo’s “Dangerous” in the Food Place while Let simply stared forward, unwavering. Later on in the evening we were presented with what we suppose was a version of the Open Challenge made famous by Discussion Davis, but the Alt-Right arranged the entire thing, with “Freddy Fischer” defending against Gene Greene. Greene, who has had a rocky status with the Alt-Right group of late, was apparently dragged out of bed by the group, then herded to the ring in his socks and underwear to once again challenge for the world title.

Most of our viewers agreed that Ichabod was looking to give an easy win to Let, perhaps propping him up only to himself claim the title from the boy, but things didn’t go according to plan. Instead, Gene Green fought back, which prompted Federal Bell to enter the ring and help Let Liu! Our worst fears were seemingly realized with Let Liu taking the assistance from the Alt-Right to defeat a man in his tighty whities. Of course Greene fought back, but ultimately a Community College Stunner not only put him down, but out, with Greene once again suffering an in-ring injury in a short career that has been plagued by them.

Truly an auspicious night for the Fixers, with Dougie Middle claiming the SCFL Pro Open Scramble Championship earlier in the evening, but was Let Liu still a Fixer? Well, disturbing footage closed the show of Let, Dougie and Xylophonist Bianchi inducting Giovanni Dinner into the group through a surreal scene that has to be seen to be believed.