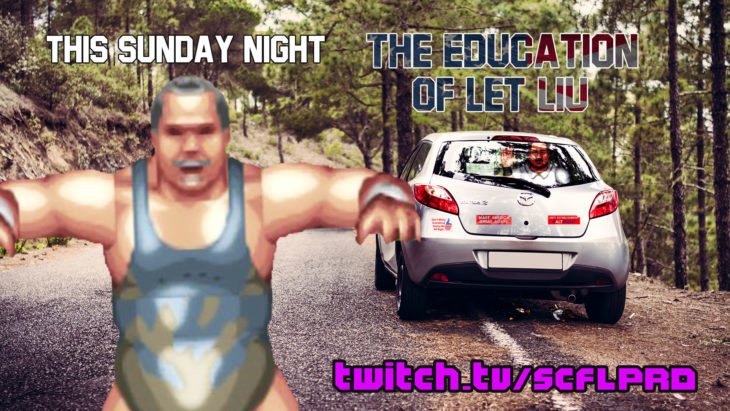 Sometimes it’s difficult to remember that Let Liu, masquerading as “Freddy Fischer”, is indeed our SCFL Pro World Championship holder. Strange, right? The fire that was lit under him while wearing a wig, a dyed singlet and some shoe polish smeared on his face is really something else, but this week he faces a new challenge. What is that challenge, exactly? We’re not sure yet. What we do know is that Ichabod Adams has claimed that this weekend he will “educate” our world champion, which has many of us on edge.

Look, it isn’t like Let isn’t an adult who can make his own decisions. He can. But the reality of Let is that he’s just one large, strange boy and isn’t quite ready for the complications of the real world. Is that perhaps unfair? Maybe. Is it reality? Yes. We here at SCFL Pro have done our best to protect Let Liu from the dangers of the world, from politics to nationalism to sex and war. What he knows and doesn’t know isn’t entirely clear, but we all try to steer him away from anything even remotely resembling adult topics.

Yet the tides seem to be turning. With his newfound power as a Freddy Fischer cosplayer he’s a different person. What does Ichabod Adams have in store for him this week? Nobody knows, but we do know that Ichabod still lays claim to a title shot, which is perhaps all that he’s talking about. Is Ichabod going to challenge Let Liu to a championship bout believing that Let is a lesser opponent? He’s already lost to Let in the Substitute Series finals, but that doesn’t seem to phase him.

Ichabod doesn’t seem to be great at winning tournaments, for what it’s worth. Last week he lost in the finals of the Bradford Culpepper Memorial Food Place tournament to Patty Acosta. Acosta, who is perhaps one of the most popular stars on our roster, will challenge Wim Nijman for the SCFL Pro US Championship in one of the biggest bouts of the evening.

The Alt-Right will also be staking their claim at greatness yet again, as Federal Bell (who was in an operation) and Piotr Petrov (his sister was in the Donald Trump pee tape) will look to reclaim their SCFL Pro World Tag Team Championship belts from the LOST BOYZ, Until Robert and Both Ferrari.

All of this and more this Sunday evening, 10pm eastern time at twitch.tv/scflpro.