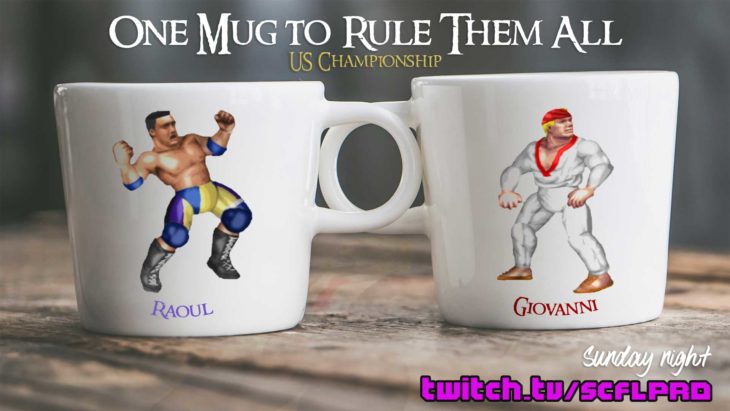 Hello wrestling fans. SCFL Pro is coming at you live, from twitch.tv/scflpro on Sunday, June 24 at 10:00 PM ET with another outstanding night of Big Ass Fights, featuring the SCFL Pro US Championship.

The evening will kick off, as usual, with a defense of the Scramble Title. Charles DuBois won the frying pan last week, and he looks to defend against seven other hungry competitors. In a MMA contest, Mike Miller will face Weather Walker. Miller failed to beat Wim Nijman last week, and Walker has been stymied by Giovanni Dinner for months, but they’ll both look to knock each other senseless.

In a hardcore contest, Wigwamm Watanabe faces Earl Vontrell in what should be a very violent affair. Stemming from some on court action during a mid-week basketball game, Freddy Fischer and Blowhole Bernard will lock horns in singles competition.

Zoning Zhang has returned to full duty as he takes on Fragrant Tanaka in a Deathmatch that hopefully doesn’t put either man out with injuries. The Trios champs are ready for more action, so Ratt Middle and Gorvis Rogers have challenged Hans and October Schmidt to a tag match.

Speaking of Trios, the Steel Drum Band of Nightsbane KVLT, Ron Lewis, and Vector Wang will face Belly Ribbon’s very own Immediately Ito, Especially Esposito, and Garden Greene. The winners of this match will be one step closer to a Trios Title opportunity.

The Shoot Title is on the line this Sunday, as Boxing Bianchi defends against Choochai TrainMuayThaiGym. Choochai looked very impressive with his knockout victory over Wigwamm in MMA, while Boxing got knocked out by Blaster Robinson in a non-title kickboxing match.

Maximo Missouri and Maniac Missouri are squaring off with Captain White and Algorithm Schneider of the High Seas in a Missouri specialty, the Hardcore Tag match.

After an outstanding couple of games of basketball, including hitting a buzzer beating game winner, Karate Hendrix has earned a shot at Wim Nijman and the Dot TV Title. Hendrix nailed his shot with 2.7 seconds to go, but he’ll need a full 3 count to take the title away from the dangerous Wijman.

Thanks to a string of victories, Giovanni Dinner has been granted an Uncle Sledding championship (SCFL Pro US Championship) match against Raoul Hernandez. Dinner will be without his beloved Mama Dinner, who remains in a hospital bed.

In the main event, Discussion Davis once again has issued his World Title Open Challenge. Nobody knows who will be the first man down the ramp to challenge Davis, but whoever it is will need a lot of luck to win, as Discussion is claiming well over 50 successful title defenses. So join us for a night of fun, fancy and the SCFL Pro US Championship on the line as well as SCFL Pro World Championship and more!

Tune in to twitch.tv/scflpro at 10:00 PM ET on Sunday, June 24 for the best wrestling on the planet!