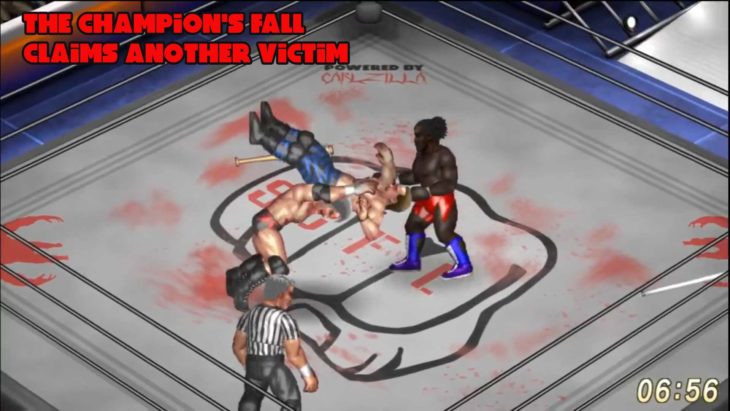 Thematically, this weekend’s SCFL Pro show saw things change while remaining the same, with Wim Nijman, Boxing Bianchi, Raoul Hernandez and Discussion Davis at the center of it all. Ushering in yet another new SCFL Pro Open Scramble Championship holder has become commonplace, with Jacques Jeanjacques taking the title. Of course, yet another soul was lost to the Shadow Realm when Freddy Fischer was involved in a back-and-forth battle with Blowhole Bernard only to be reduced to simply an arm, without a friend in the world to carry it for him.

Boxing Bianchi kept things normal by defending the SCFL Pro Shoot Championship against the very tough challenger that is Choochai TrainMuayThaiGym in just over nine minutes, once again sort of proving Sledding Bianchi’s theory that these men should only be fighting for nine minutes. Sort of.

Change was hard to resist after that, though, with Wim Nijman, the most successful SCFL Pro Dot TV Championship holder in history, facing off against the guy who has struggled to capture singles gold since the company did away with the SCFL Pro SWA Championship. Of course, Karate Hendrix won the March Sadness tournament, only to lose to Spencer Morgan in his SCFL Pro US Championship challenge, making this Dot TV match feel almost like a foregone conclusion. What was interesting was that Karate Hendrix holds wins over Wim Nijman, notably in the March Sadness tournament, but Wim’s momentum was undeniable. So the shock when Karate Hendrix landed a kick to the midsection, then threw his whole body into a spinning roundhouse kick that landed square on the jaw of Wim, covering him for the three count was visceral.

The momentum of change wouldn’t stop there, either, as Giovanni Dinner — with Sledding Bianchi in his corner — challenged Raoul Hernandez for his newly-won SCFL Pro US Championship in what was a very Raoul-sided affair. What was beginning to look like a failed singles run without Mama Dinner in his corner, Giovanni summoned the strength to make a roaring comeback, landing a series of belly-to-back suplexes on the champion which was enough for a surprise three-count, proving that Giovanni WITHOUT Mama in his corner is capable of doing big things, all while Sledding Bianchi looked on proudly. The mug now belongs to Giovanni, with Sledding Bianchi by his side.

The Champion’s Fall Claims Another Victim

Things between the Alt-Right and Discussion Davis came to a head when Discussion held yet another SCFL Pro World Championship open challenge, with another Alt-Right challenger coming out to take a stab at the title. This time it was Gene Greene, with the entire stable out in his corner, tossing him weapons. This brought out Miles Manhoef who, unlike past appearances, didn’t focus on both men, but instead solely on Gene Greene while a bloodied Discussion Davis welcomed the assistance. It turned into sort of a brutal beatdown of Greene that saw the Champion’s Fall knock Greene out and Discussion Davis holding a win over everyone within the Alt-Right, but not a win over Miles Manhoef.