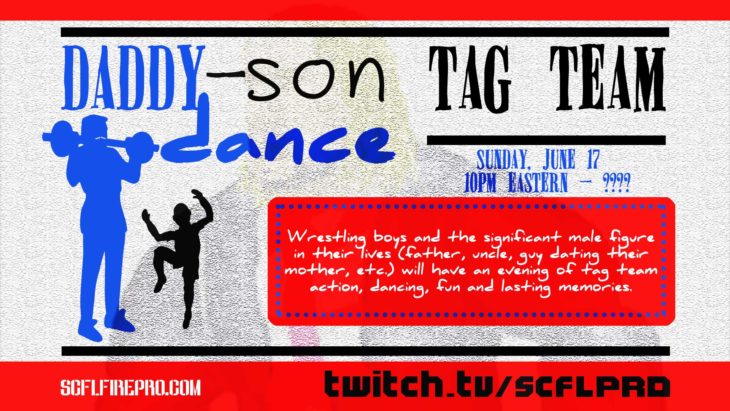 Hello wrestling fans. SCFL is back with another unique night of fights, live at twitch.tv/scflpro but this time, there’s a twist: we’re moving to Sunday night!

Kicking off the action at 10:00 PM ET, Ron Harris looks to make history as he defends his frying pan championship in the Opening Scramble match. Harris has defended the skillet once before, and if he somehow wins the battle royal again, he will be the only person in SCFL history with two consecutive defenses.

Sunday is of course, Father’s Day. Never one to shy away from promotional action, SCFL is bringing a Daddy and Son Tag Team Tournament. The winners of this eight-team tournament will be Tag Title number one contenders. Incidentally, the Tag Titles are also being defended later that evening as the LOST Boyz have granted a rematch to former champs, Foundation Russo and Computer Collins. There was some disturbing spectral involvement in their last meeting, which hopefully will be cleared up this time around.

Also on the schedule is a Hardcore title match. Dangerous and devastating champ Technology Cooper takes on the equally vicious Puncho Baggins. These men met a few weeks ago when Puncho teamed with Ricky Robinson on behalf of Raoul Hernandez to take on Spencer Morgan and his surprise partner, Cooper. There were some rough and tumble moments in that contest, but they won’t compare to the violence that will surely be doled out when Baggins and Cooper meet one on one with barbed wire and fluorescent light tubes in play.

Wim Nijman has moved beyond being a good Dot TV champion, to a great one, and he’s now even surpassed the mark of greatest Dot TV champion in SCFL history. Wim is arguably the greatest title holder SCFL has ever seen. He’s taking on a man who, a few months ago would not have even been considered for a shot at the title, Mike Miller. However, following his injury at the hands of Credit Lewis back at March Sadness, and subsequent recovery, Miller has become a man on a mission. His submission skills have gone through the roof, and since his return at the Mr. Bianchi Backyard Barbecue Brawl, Miller has submitted at least five men, including tearing the arms of Blaster Robinson and Credit Lewis in the process. Miller might be the one man capable of ending Wim’s terrifying win streak, which has been marked by consecutive knockout victories.

In the main event, Discussion Davis continues his World Title Open Challenge. Last week, Davis was met by Federal Bell of the Alt-Right. Bell looked to be in control throughout most of the match, but he couldn’t put Davis away. Digging deep, Discussion Davis hoisted Bell up and brought him down, hard, with the Champion’s Fall, winning the match and retaining his title. As with most of his Open Challenges, Discussion won’t know who he’s facing until that person walks down the ramp towards the ring, so anyone on the planet could potentially leave the Beliribbuon Civic Auditorium and Hog Compacting Center with that belt.

Join us, this Sunday night, at 10:00 PM ET on twitch.tv/scflpro for a fantastic night of pro wrestling, plus the love only a father, or father-type figure can show a son, or son-type figure.