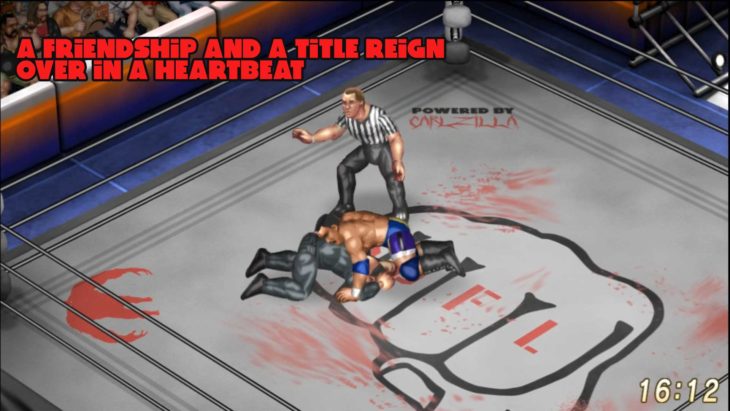 Being a great champion is a daunting task, which is something that Spencer Morgan found out the hard way throughout his reign as SCFL Pro US Champion. He won the title in a thrilling display of fortitude, then went on to become one of SCFL Pro’s most popular figures as champion. The problem always was that he wasn’t ready to leave his past life behind. While he was running the ropes and thrilling viewers on Twitch dot TV, he was still holding down his position as an assistant regional manager at the Men’s Wearhouse in Milwaukee. We’ve seen that job cost him dearly before, including him being forced to vacated the SCFL Pro Dot TV Championship due to a shift, now we’ve seen it cost him the SCFL Pro US Championship in a roundabout way.

First, he was paged during a tag team match with his now-former friend, Raoul Hernandez, forcing him to leave mid-match to race back to the Men’s Wearhouse. Then he wasn’t even in the building the next week for another tag match, leaving Raoul on his own. It was at that point that Raoul snapped, knowing that he’d never get his friend back and began looking for revenge. In the weeks that followed he relied on old friends to help get his revenge, then interrupted the show multiple times until he was granted his shot at Spencer. Now, this week, he was given that shot and he did, indeed, make Spencer Morgan pay by knocking him out cold.

Spencer was making a roaring comeback, flying off of the top rope with a splash to the small of Raoul’s back, only he was too exhausted to make the cover. Both men fought valiantly to their feet, only for Raoul to get a grip on the back of Spencer’s neck, which led to him driving his knees into the forehead of Morgan that ultimately left him unconscious.

There were plenty of surprises throughout the rest of the show, as well, including Federal Bell answering the Open Challenge of Discussion Davis and putting on one hell of a performance against the champion. Of course, nobody expected Miles Manhoef to interfere in the bout, either. Miles was hot when he came in, making his presence felt before he took to the ramp and stood guard, making sure that none of the Alt-Right could get involved. Discussion was able to put Federal away in just under 30 with the Champion’s Fall.

But not all was bad for the Alt-Right, as Ron Harris was actually able to defend the SCFL Pro Open Scramble Championship. He took advantage of bitter rivals the Masked Cyclist and Bradford Culpepper were battling it out, with Culpepper knocking Cyclist out cold with a huge chokeslam, only for Ron to take advantage and roll Culpepper up to secure the win.

The SCFL Pro Hardcore Tag Championship also changed hands as the duo of Blowhole Bernard and Justice Turner took it to the extreme, taking a cue from Earl Vontrell’s brutal knockout of Front Reed earlier in the evening with a piece of wood to the spine by using a tiki torch right to the spine of Kelly Kelley, knocking out the Irishman and perhaps sending him into a spiral of self-loathing that we’ve seen from him before. SCFL Pro Dot TV Championship history was also made as yet another defense was made by Wim Nijman, with Magomed Ashmanov taking the fight to Wim only for Wim to channel his inner chi and knock Magomed out with a death valley driver.